For the Good of All, Do Not Destroy the Birds: Essays (Hardcover) 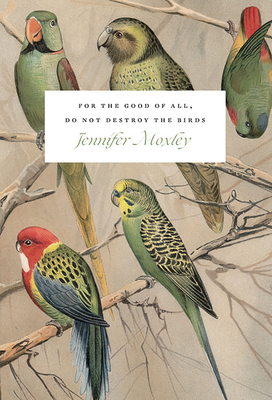 For the Good of All, Do Not Destroy the Birds: Essays (Hardcover)

Literary Nonfiction. Essays. A blend of literary criticism and memoir, Jennifer Moxley's FOR THE GOOD OF ALL, DO NOT DESTROY THE BIRDS recounts a life spent in the company of birds and poems, intimately attuned to the mysteries of singing. These essays trace the poet's calling to sources in birdsong and sacrifice, asking, Must a woman be sentenced to endless night for a poet to be born? From the myth of Orpheus and Eurydice to the death of the poet's mother, Moxley explores the losses that underlie poetry, and in turn, poetry's use as a measure for living.

FOR THE GOOD OF ALL, DO NOT DESTROY THE BIRDS opens a magical place of clean-lined prose, scholarly knowledge, and inspiration. The writing is deep and lucid, it cuts to the bone and yet respects the mystery of things. It works by a literary transfiguration. The poet shines with bright rays of thought and skill as she stands on a mount of experience created by the songs of poets and birds--from Sappho and Ovid to Robert Duncan and Anne Carson, from nightingales to lyrebirds--until they appear next to her and converse with her as she writes.--Robert Adamson