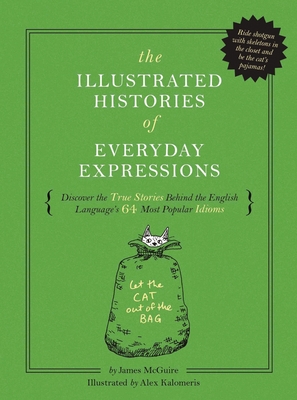 
Backordered
The Illustrated Histories of Everyday Expressions uncovers the fascinating, humorous, and often unbelievable origin stories behind the English language’s most common sayings!

Nobody thinks twice about sayings like “bite the bullet” and “the cat’s out of the bag.” But the strange and wonderful origins of these expressions are far from arbitrary: They are rooted in forgotten history. Within this book, you will discover idioms like:

- Why we say an unwell person is “under the weather.” It goes back to when sickly sailors and seafarers had to rest below deck!
- How come sitting in the passenger seat of a vehicle is called “riding shotgun."  In the Wild West, passengers had a crucial job: packing heat and preventing highway robberies!
- What’s up with the phrase, “cat got your tongue.” Here’s a hint: It doesn’t have anything to do with cats!

With over 100 pieces of original artwork, The Illustrated Histories of Everyday Expressions is as beautiful as it is entertaining and informative. Read up on this fascinating history of the English language’s 64 most popular idioms, and you will know what it really means when you say “pass with flying colors,” “bury the hatchet,” and “rest on your laurels”!
James McGuire is a writer, editor, and inveterate word hound. When he is not collecting idioms and obscure words, you can find him mastering his mini golf game or taking long walks with his beloved Newfoundland pup, Brumus. He Lives in St. Louis, Missouri, where you might say his home is his castle.

Alex Kalomeris is an illustrator, animator, and printmaker based in Los Angeles, California. He got his BFA in Illustration from the Rhode Island School of Design, where he studied drawing, animation, printmaking and graphic design. Since graduating in 2015, he has been working on an array of projects across the visual spectrum. His work has been featured in published books, editorial pieces, and shown in classrooms around the country. Themes of adoration and curiosity for the natural world show up often in his work. Traveling and recording what he sees, Alex takes in his experiences and imbues them with pen and ink. When not in his studio, he can be found wandering the trails of Los Angeles, sketching the natural world.