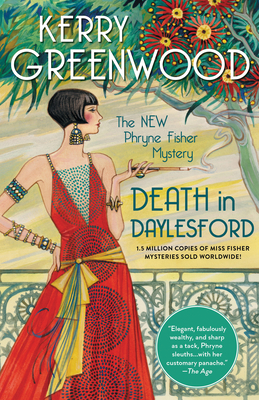 This is book number 21 in the Phryne Fisher Mysteries series.

The 7 year wait is over—Miss Fisher is back in a new adventure!

"The real star is Phryne with her Jazz Age fashions, devil-may-care attitude, and dry narrative wit."—Booklist

Taking the waters has never been more delicious—or dangerous...

When a mysterious invitation for a spa vacation arrives for Miss Phryne Fisher from an unknown retired Captain Herbert Spencer, Phryne's curiosity is piqued. Spencer runs a retreat in Victoria's rural spa country for shell-shocked veterans of World War I. It's a cause after Phryne's own heart, but what can Spencer want from her?

Phryne and her faithful servant Dot set out for Daylesford, viewing their rural sojourn as a short holiday. While Dot gets to know the remarkable women who run the hotel where they are lodging, Phryne enjoys an enticing meal—and dessert—with the attractive Captain Spencer. But their relaxation is short-lived as they are thrown into treacherous Highland gatherings, a mysterious case of disappearing women, and a string of murders committed under their very noses. Meanwhile, back at home, Phryne's three wards are busy solving a mystery of their own when a schoolmate is found floating facedown near the docks—and pregnant at the time of her death.

Read the novels that inspired both the Miss Fisher Murder Mysteries and the Ms. Fisher's Modern Mysteries streaming series on AcornTV.

Praise for the Phryne Fisher Mysteries
"Anyone who hasn't discovered Phryne Fisher by now should start making up for lost time."—Booklist
"Phryne handsomely demonstrates once more that even a compulsion to explore every mystery that comes her way needn't interfere with her appetite for life."—Kirkus Reviews

Kerry Greenwood was born in the Melbourne suburb of Footscray and after wandering far and wide, she returned to live there. She has degrees in English and Law from Melbourne University and was admitted to the legal profession on the 1st April 1982, a day which she finds both soothing and significant. Kerry has written three series, a number of plays, including The Troubadours with Stephen D'Arcy, is an award-winning children's writer and has edited and contributed to several anthologies. The Phryne Fisher series (pronounced Fry-knee, to rhyme with briny) began in 1989 with Cocaine Blues which was a great success. Kerry has written twenty books in this series with no sign yet of Miss Fisher hanging up her pearl-handled pistol. Kerry says that as long as people want to read them, she can keep writing them. In 2003 Kerry won the Lifetime Achievement Award from the Australian Association.
"Another round for a delightfully complex heroine whose social conscience infuses every case with extra appeal." — Kirkus Reviews

"Greenwood's fans will be satisfied as Miss Fisher uses her cunning and wit to solve another crime and keep her reputation intact." — New York Journal of Books

"This is the most complicated tapestry Greenwood has woven for Phryne yet, but all parties are up for the challenge. The real star is the fabulous Phryne, with her Jazz Age fashions, devil-may-care attitude, and dry narrative wit. Fans of the popular Australian TV show based on the series will find much to love here, and Phryne's adventurous readers will be glad she has returned." — Booklist