Hacking Darwin: Genetic Engineering and the Future of Humanity (Paperback) 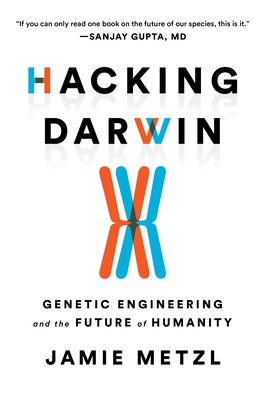 Hacking Darwin: Genetic Engineering and the Future of Humanity (Paperback)

"A gifted and thoughtful writer, Metzl brings us to the frontiers of biology and technology, and reveals a world full of promise and peril." —Siddhartha Mukherjee MD, New York Times bestselling author of The Emperor of All Maladies and The Gene

Passionate, provocative, and highly illuminating, Hacking Darwin is the must read book about the future of our species for fans of Homo Deus and The Gene.

After 3.8 billion years humankind is about to start evolving by new rules…

From leading geopolitical expert and technology futurist Jamie Metzl comes a groundbreaking exploration of the many ways genetic-engineering is shaking the core foundations of our lives—sex, war, love, and death.

At the dawn of the genetics revolution, our DNA is becoming as readable, writable, and hackable as our information technology. But as humanity starts retooling our own genetic code, the choices we make today will be the difference between realizing breathtaking advances in human well-being and descending into a dangerous and potentially deadly genetic arms race.

Enter the laboratories where scientists are turning science fiction into reality. Look towards a future where our deepest beliefs, morals, religions, and politics are challenged like never before and the very essence of what it means to be human is at play. When we can engineer our future children, massively extend our lifespans, build life from scratch, and recreate the plant and animal world, should we?

Jamie Metzl is a leading futurist, geopolitical expert, science fiction novelist, and media commentator and a Senior Fellow of the Atlantic Council who has served in the White House, State Department, and United Nations. In February 2019, Jamie was appointed to the World Health Organization expert advisory committee on developing global standards for the governance and oversight of human genome editing. In addition to Hacking Darwin: Genetic Engineering and the Future of Humanity, he has written a history of the Cambodian genocide, the historical novel The Depths of the Sea, the genetics sci-fi thrillers Genesis Code and Eternal Sonata. www.jamiemetzl.com.