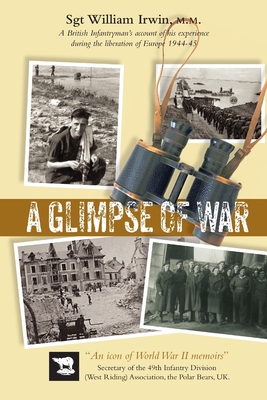 
Not On Our Shelves—Ships in 1-5 Days
(This book cannot be returned.)
A Glimpse of War is a true account by British Army Sergeant William Irwin M.M. of 1st Battalion Leicestershire 'Tigers' regiment of the liberation of Europe in 1944-45. An infantry platoon member who became platoon leader due to loss of comrades, he describes in frank detail the trials and tribulations of the ordinary soldier on the frontline across Normandy, Belgium to north-west Holland and the Rhine, Germany, with the combined 49th Infantry Division known as the 'Polar Bears'. Sgt William Irwin, M.M. A British Infantryman's account of his experience during the liberation of Europe 1944-45 is extraordinary on so many levels. Beautifully written, emotionally evocative, powerfully sustained imagery.