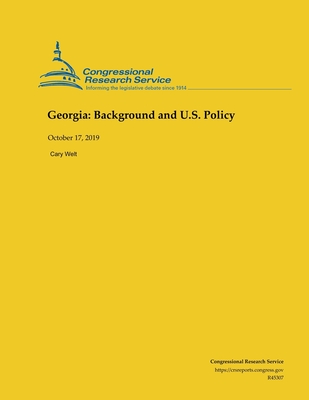 
Special Order—Subject to Availability
(This book cannot be returned.)
Georgia is one of the United States' closest partners among the states that gained their independence after the USSR collapsed in 1991. With a history of strong economic aid and security cooperation, the United States has deepened its strategic partnership with Georgia since Russia's 2008 invasion of Georgia and 2014 invasion of Ukraine. U.S. policy expressly supports Georgia's sovereignty and territorial integrity within its internationally recognized borders, and Georgia is a leading recipient of U.S. aid to Europe and Eurasia. Many observers consider Georgia to be one of the most democratic states in the post-Soviet region, even as the country faces ongoing governance challenges. The center-left Georgian Dream-Democratic Georgia party (GD) holds a dominant political position, with about 70% of seats in parliament. Although Georgia faces high rates of poverty and underemployment, its economy has performed better since 2017 than it did in the previous four years.