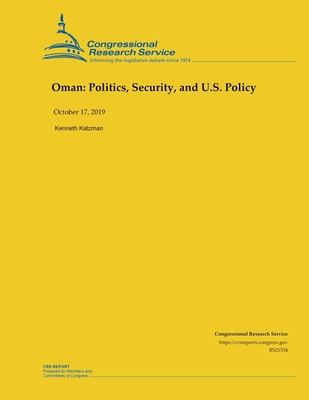 
Special Order—Subject to Availability
(This book cannot be returned.)
The Sultanate of Oman has been a strategic partner of the United States since 1980, when it became the first Persian Gulf state to sign a formal accord permitting the U.S. military to use its facilities. Oman has hosted U.S. forces during every U.S. military operation in the region since then, and it is a partner in U.S. efforts to counter terrorist groups and related regional threats. Oman's ties to the United States are unlikely to loosen even after its ailing leader, Sultan Qaboos bin Sa'id Al Said, leaves the scene. Qaboos' frail appearance in public appearance has fueled speculation about succession, but he does continue to meet with visiting leaders. He received Israeli Prime Minister Benjamin Netanyahu on October 25, 2018, for the first such visit by Israeli leadership to Oman in more than 20 years. Oman has tended to position itself as a mediator of regional conflicts, and generally avoids joining other countries in the Gulf Cooperation Council (GCC: Saudi Arabia, Kuwait, UAE, Bahrain, Qatar, and Oman) in regional military interventions. Oman joined the U.S.-led coalition against the Islamic State organization, but it did not send forces to that effort, nor did it support groups fighting Syrian President Bashar Al Asad's regime. It opposed the June 2017 Saudi/UAEled isolation of Qatar and did not join a Saudi-led regional counterterrorism alliance until a year after that group was formed in December 2015. Omani leaders have historically asserted that engaging Iran is preferable to confrontation.. Oman's ties to Iran have enabled it to broker agreements between the United States and Iran, including the release of U.S. citizens held by Iran as well as U.S.-Iran direct talks that later produced the July 14, 2015, nuclear agreement between Iran and the international community (Joint Comprehensive Plan of Action, JCPOA). Oman was the only GCC state not to downgrade its relations with Iran in connection with a January 2016 Saudi-Iran dispute. Yet, U.S. officials credit Oman with enforcing reimposed U.S. sanctions and with taking steps to block Iran's efforts to ship weapons across Oman's borders to Houthi rebels in Yemen. Prior to the 2011 wave of Middle East unrest, the United States consistently praised Sultan Qaboos for gradually opening the political process even in the absence of evident public pressure to do so. The liberalization allows Omanis a measure of representation through elections for the lower house of a legislative body, but does not significantly limit Qaboos's role as paramount decisionmaker. The public support for additional political reform, and resentment of inadequate employment opportunities produced protests in several Omani cities for much of 2011, and for two weeks in January 2018, but government commitments to create jobs apparently helped calm the unrest. As have the other GCC states since the 2011 Arab uprisings, Oman has increased press censorship and arrested some critics who use social media. The periodic economy-driven unrest demonstrates that Oman is having difficulty coping with the decline in the price of crude oil since mid-2014. Oman's economy and workforce has always been somewhat more diversified than some of the other GCC states, but Oman has only modest resources and has sought to attract foreign investment, including to fund the major development of Al Duqm port. The U.S.-Oman free trade agreement (FTA) was intended to facilitate Oman's access to the large U.S. economy and accelerate Oman's efforts to diversify. Oman receives small amounts of U.S. security assistance focused primarily on building capacity of Oman's counterterrorism and border and maritime security authorities.