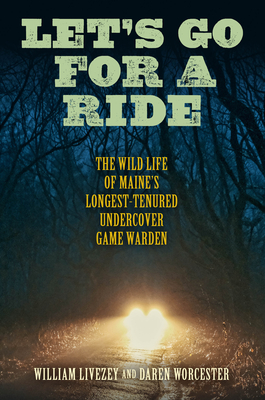 By William Livezey, Daren Worcester (With)


Not On Our Shelves—Ships in 1-5 Days
Let's Go for a Ride is the story of William (Bill) Livezey's thirty-year career in the Maine Warden Service. Heralded as "one of the best covert investigators in the country" by Maine Warden Service Lieutenant Dan Scott, Bill is the agency's longest-tenured undercover operative, having spent twenty years in the Special Investigations Unit. "Let's go for a ride" is the universal bad-guy code for breaking the law. Among Maine's most sinister wildlife offenders, its utterance is prone to incite alcohol-fueled night hunting, high-speed car chases on winding country roads, drug dealing, arson, and attempted murder. The worst of the worst were Bill Livezey's bread and butter. His success at putting the truly bad guys out of business was driven by his upbringing as one of them. Born and raised in Pennsylvania, Bill's father was a successful businessman whose blind ambition sent him down the dark path of drug trafficking. It wasn't long before young Bill was tagging along and doing drugs with his dad. The aftermath of witnessing his father perish in a fiery standoff with police sent Bill spiraling out of control. He lashed out at law enforcement by dealing drugs, and he numbed the pain and confusion by doing them. Deep down, Bill knew his life was broken. When a high school football teammate invited him to attend a Fellowship of Christian Athletes meeting, he discovered his faith and a new path.
A graduate of Unity College, William Livezey briefly worked as a corrections officer in the Maine State Prison before beginning a thirty-year career in the Maine Warden Service. He worked for twenty years as an undercover investigator and in 2005 received the "Living Legend Award" as an Officer of the Month from the National Fallen Officers Memorial. He was named the Maine Warden Service Warden of the Year in 2004. Bill is also a recipient of the National Boating Award, and the Maine Warden Service has further recognized his duty with a Meritorious Service Award and six Exemplary Service Awards. After retiring from the Warden Service in 2020, Bill now lives in Hershey Pennsylvania, with his wife, Gail, where they serve as house parents at the Milton Hershey School. Daren Worcester is the author of Open Season, True Stories of the Maine Warden Service. He has also been published in Backpacker and Down East magazines. A native of Hanover, Maine, and a graduate of the University of Maine, Daren lives in New Hampshire with his family.