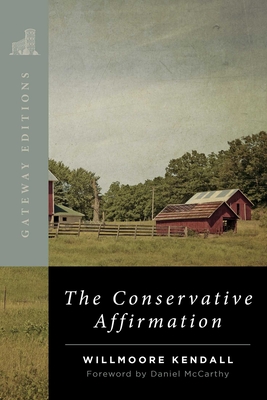 
Not On Our Shelves—Ships in 1-5 Days
Maverick political scientist Willmoore Kendall predicted the triumph of conservatism. Upon the 1963 publication of Kendall's The Conservative Affirmation, his former Yale student William F. Buckley, Jr. called him "one of the most superb and original political analysts of the 20th century," but even Buckley shook his head at what appeared to be Kendall's "baffling optimism."

During the 60's, Kendall stood apart from the mainstream conservative movement which he accused of being anti-populist and of "storming American public opinion from without" by wrongly assuming that the American people were essentially corrupt and "always ready to sell their votes to the highest bidder." Kendall believed that Americans would come to actively realize the conservatism which they had always actually lived.
Daniel McCarthy is the editor of the Intercollegiate Studies Institute's journal Modern Age and was previously editor of The American Conservative. He is also the director of the Robert Novak Journalism Fellowship Program. He is a graduate of Washington University in St. Louis, where he studied classics.