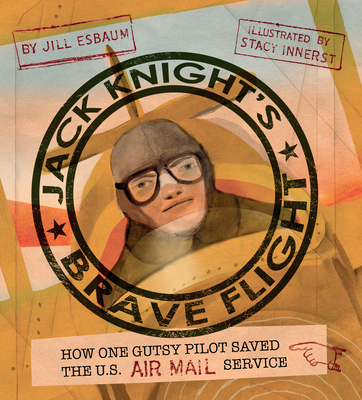 
In Stock—Click for Locations
High-flying history is brought to life in this suspenseful story of an unknown and daring pilot named Jack Knight, who in 1921 flew his biplane straight into a blizzard over America's heartland and saved the US Air Mail Service in the process.

When Jack Knight takes off in his biplane from North Platte, Nebraska, in 1921, hundreds of people crowd the airstrip. Is Jack transporting a famous passenger? Is he ferrying medicine for a sick child? Nope--Jack has six sacks of mail.

For the past few years, biplanes like Jack's have been flying the mail only during daylight hours. Flying after dark is risky and crashes are too common, so lawmakers decide to cut funding for the US Air Mail Service. Outraged officials and pilots want to prove that flying the mail is best, so they concoct a plan--a coast-to-coast race.

But when a crash, exhaustion, and a snowstorm ground three of the planes, Jack Knight becomes the race's only hope. All he has to do is fly all night long, leaning out of the plane to see, and navigate a blizzard over land he's never covered with an empty fuel tank. Will Jack pull it off and save the Air Mail Service?
Jill Esbaum is the award-winning author of several books for young readers. Some of her titles include LITTLE KIDS FIRST BIG BOOK OF HOW, CHERRY BLOSSOMS SAY SPRING, and HOW TO GROW A DINOSAUR. A frequent school visitor and conference speaker, she also teaches writing for children.

Stacy Innerst is a painter, children's book artist, and educator. His books have received a host of starred reviews and have been honored with The New York Times/New York Public Library Best Illustrated Children's Books Award, the SCBWI Golden Kite for Picture Book Illustration as well as several Gold Medals from the Parents' Choice Awards. His recent books for Calkins Creek include SAVING LADY LIBERTY and LINCOLN CLEARS A PATH. Illustrator site: stacyinnerst.com
★ "This fast-paced picture book outlines the landmark night flight of pilot James H. 'Jack' Knight (1892–1945), who helped extend the life of the U.S. Air Mail Service by serving as a relay pilot in the first overnight cross-country U.S. airmail delivery. In snappy, climactic prose, Esbaum traces the obstacles Knight encountered, including bodily discomfort and an unavoidable blizzard in Illinois. Innerst’s atmospheric illustrations conjure the rough elements and close quarters in deep blues and cool gray washes, with fluid figures, stamped text, and finely brushed details adding texture. A riveting journey about an undersung aviator. Back matter includes creators’ notes and a timeline sharing highlights in the history of the U.S. mail."—Publishers Weekly, starred review

"Esbaum’s conversational present-tense narration places readers in the middle of the action alongside Jack Knight...Harrowing details, such as snow-covered runways, miscommunication between airfields,  and Knight literally freezing to his biplane’s seat, amplify the ultimate success of the daring pilot. Innerst’s mixed-media  illustrations, primarily rendered in watercolor, ink, and pencil, are expressive and atmospheric. Rather than depicting objects and characters realistically, he manipulates their sizes, shapes, and colors to accurately reflect the mood of any  given scene...A thrilling and well-told moment in the history of information  distribution across the United States." —The Horn Book

"On the night of February 22, 1921, hundreds of Nebraskans turn out to watch Jack Knight take off on his assigned leg of an aerial relay race—not to break speed records, not to win prizes, not even to wow a crowd, but to convince government bean counters that newly popular air mail delivery is a worthy investment....Esbaum retraces Knight’s night with breathtaking pacing and a touch of humor, deftly underscored by Innerst’s equally taut yet waggish mixed media artwork." —The Bulletin of the Center for Children's Books

"One hundred years ago, the mail system was in jeopardy, and in this informational picture book, Esbaum takes readers back to a pivotal night. On the evening of February 22, 1921, Jack Knight was flying precious cargo—not a celebrity or jewels, but six sacks of mail! Visceral descriptions relate Knight’s flying conditions... Innerst’s equally dramatic illustrations alternate between airport scenes on the ground in yesteryear yellows and Knight’s frigid night flying in luminous midnight blues." —Booklist

"An exciting story. The text maintains a tense, suspenseful pace, and the watercolor, ink, pencil, rubber stamp, and digital illustrations bring the journey to life... extensive back matter includes an author’s note, photos, highlights in the history of the U.S. mail, bibliography, and illustrator’s note. This historical adventure has great appeal and may renew kids’ interest in the postal service; a valuable addition to nonfiction collections." —School Library Journal

"The jaunty storytelling and atmospheric illustrations vividly depict the challenges of flying an open cockpit plane in winter with only signal fires to guide pilots through the night and snow impeding opportunities to refuel. The broad strokes of dark watercolor and ink are just detailed enough to evoke the shapes of planes and people on a snowy night. This is a lively read." —School Library Connection