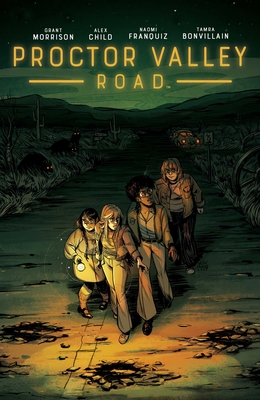 
On Our Shelves Now at:
August, Rylee, Cora & Jennie have organized a “Spook Tour” on the most haunted stretch of road in America, but when it turns deadly they must slay the evils roaming Proctor Valley Road!

August, Rylee, Cora & Jennie have organized a “Spook Tour” with their classmates on the most haunted, demon-infested stretch of road in America to fund attending the concert of their dreams. But when their visit turns deadly, these four friends race to rescue the missing students… before the town tears them limb from limb. Now they must slay the evils roaming Proctor Valley Road… along with the monsters lurking in the hearts of 1970s America. Visionary author Grant Morrison (Klaus, Batman: Arkham Asylum) and co-writer Alex Child (BBC’s Holby City) along with artist Naomi Franquiz (Tales from Harrow County) present a chilling new horror series about the mysterious monsters that haunt Proctor Valley Road – and the four misfit teenagers who must stop them. Collects Proctor Valley Road #1-5.
Grant Morrison, MBE is a Scottish comic book writer and playwright. They are known for their nonlinear narratives and countercultural leanings in their runs on titles including DC Comics's Animal Man, Doom Patrol, Batman, JLA, Action Comics, All-Star Superman, Green Lantern, The Flash, Vertigo's The Invisibles, and Fleetway's 2000 AD. They have also served as the editor-in-chief of Heavy Metal and currently operate as an adviser for the magazine. They are the co-creator of the Syfy TV series Happy! starring Christopher Meloni and Patton Oswalt. Morrison is also an occasional actor, with their most recent appearance being a brief cameo as a news broadcaster in the 2017 horror comedy film Mom and Dad, which starred Nicolas Cage and Selma Blair.