A Thief Among the Trees: An Ember in the Ashes Graphic Novel (Hardcover) 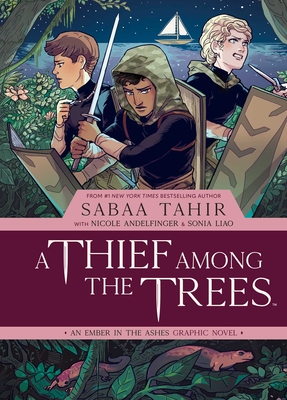 A Thief Among the Trees: An Ember in the Ashes Graphic Novel (Hardcover)


Special Order—Subject to Availability
Taking place years before the bestselling An Ember in the Ashes novel series, this standalone original graphic novel follows three young military recruits: Elias, Helene, and Tavi, during their brutal training as soldiers for the Martial Empire.

WITHIN THE EMPIRE THERE ARE NO QUESTIONS, ONLY ORDERS.

Elias, Helene and Tavi are Fivers --in training to become elite military recruits for the Martial Empire at Blackcliff Academy. When they’re sent on a dangerous mission to steal a heavily-guarded poison on Isle South, they soon find themselves up against surprising enemies -- including other recruits. As the true horror of their assignment is revealed, these three will begin to confront the harrowing realities of Martial rule, their place in the system . . . and the choices they must make to survive.

New York Times bestselling author Sabaa Tahir joins writer Nicole Andelfinger and artist Sonia Liao for an all-new original graphic novel revealing an early tale of Elias and Helene at Blackcliff, and a stirring standalone chapter in the An Ember in the Ashes mythology.
#1 New York Times bestselling author of the An Ember in the Ashes series, which has been translated into over thirty-five languages. She grew up in California’s Mojave Desert at her family’s eighteen-room motel. There, she spent her time devouring fantasy novels, raiding her brother’s comic book stash, and playing guitar badly. She began writing An Ember in the Ashes while working nights as a newspaper editor. She likes thunderous indie rock, garish socks, and all things nerd.