Giant Days: Not On The Test Edition Vol. 2 (Hardcover) 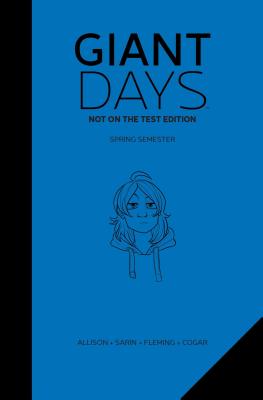 Giant Days: Not On The Test Edition Vol. 2 (Hardcover)

This is book number 2 in the Giant Days series.

Going off to university is always a time of change and growth, but for Esther, Susan, and Daisy, things are about to get a little weird.

University is a time to learn for most, but for Susan, Esther, and Daisy academia seems to be throwing more at them than books and learning. House-hunting, terrible breakups, and regretful hookups pepper the girls lives this semester as they navigate their way through Freshman year. Thankfully, they have each other.

This second volume of Giant Days: Not On The Test Edition, written by John Allison (Bad Machinery, Scary Go Round) and illustrated by Max Sarin and Liz Fleming, collects the third and fourth story arcs of the Eisner Award and Harvey Award-nominated series, as well as additional never-before-collected Giant Days comics in a deluxe hardcover.
John Allison is a British comic writer and artist, known for his Eisner Award nominated series Giant Days, as well as webcomics Bobbins, Scary Go Round, and Bad Machinery.