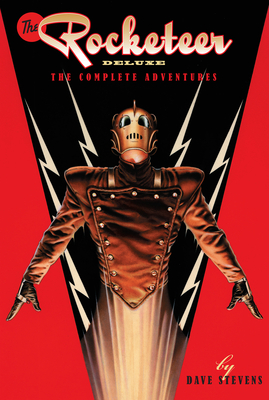 
On Our Shelves Now at:
Take flight with Cliff and Betty in this beautiful oversized collection that features the original complete comics saga!

This long-out-of-print collection, and Eisner-award winner for best design, features the entire Rocketeer saga by Dave Stevens, plus more than 100 pages of supplemental material—sketches, prelims, and tons more—giving new insight into the artist’s thought processes as he was developing The Rocketeer! And all wrapped up in a lovely slipcase!

Dave Stevens’ The Rocketeer burst onto the shelves of comic book shops 40 years ago! This beautifully illustrated and charming story features the adventures of down-and-out stunt pilot Cliff Secord after he finds an experimental jetpack. With the help of his closest friend and confidante Peevy, and the support (mostly) of his beautiful girlfriend Betty, Cliff takes to the skies in 1938 Los Angeles. Intrigue abounds as Cliff finds himself fighting enemy spies and nefarious criminals, all the while trying to keep his personal life with Betty from being waylaid by his double-life as The Rocketeer!
Dave Stevens was born in Lynwood, California on July 29, 1955. His career in comics began in 1975, assisting veteran artist Russ Manning on the syndicated Tarzan newspaper strip. Stevens went on to toil as a storyboard artist for Hanna-Barbara, DePatie-Freleng and Filmation animation studios, working on such programs as Super Friends and The Godzilla Power Hour. Later, Stevens was asked by Steven Spielberg to create presentation boards for Raiders of the Lost Ark. During the same period, Stevens storyboarded the groundbreaking music video Thriller for Michael Jackson and did production design for Jackson’s Victory Tour.

In 1982, Stevens debuted the feature for which he is best known, The Rocketeer. Initially appearing as a back-up feature in the second issue of an independent comic, the pulp-inspired story of Cliff Secord, a daring stunt pilot who finds an experimental rocket pack, became an instant sensation. The Rocketeer went on to star in his own comic book series, and in 1991 would become a well-received major motion picture from Walt Disney Studios.

Stevens’ lush figure work, particularly when rendering the female form, coupled with his elegant brush line, brought him much acclaim far beyond the confines of comic books. In particular, his breathy portrayals of Cliff’s girlfriend Betty, inspired by famed pin-up queen Bettie Page, helped revitalize interest in the ‘50s icon, a fact openly acknowledged by Page, who became close friends with Stevens in her final years.

On March 11, 2008, Dave Stevens lost a long battle against leukemia.