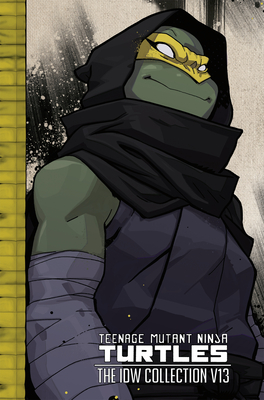 This is book number 13 in the TMNT IDW Collection series.

It's all been leading up to this! A massive showdown on the streets of New York City! As New York gets torn apart by different factions mutant and human alike, Karai returns and the future of the TMNT, in fact all of NYC, comes down to a final negotiation between Splinter and Karai. It's the shocking culmination of nearly a decade of storytelling as our heroes face their darkest hour against a multitude of enemies bent on their total destruction. Find out how a City at War will change the world forever!

Plus, abandon all hope... as the most infamous villain in the Turtles' universe, Shredder, returns! Oroku Saki's death was just the beginning, and his journey through the depths of the underworld proves to be anything but a divine comedy. How much of Shredder's soul will remain after he faces the horrors of hell.

Collects Teenage Mutant Ninja Turtles #90-100 including the 2019 Free Comic Book Day issue, Macro-Series: Raphael, and the Shredder In Hell mini-series.
Tom Waltz is a former active duty U.S. Marine, Desert Storm vet, and former California National Guard Military Policeman. He is an editor for IDW Publishing, and the writer of critically-acclaimed comics and graphic novels, including Teenage Mutant Ninja Turtles; The Last Fall; Finding Peace (with Nathan St John); the Silent Hill books Sinner's Reward, Past Life,and Anne's Story; and others. He has also written for video games, including Silent Hill: Downpour, Ghostbusters: Sanctum of Slime, and the TMNT games Brothers Unite, and Mutants in Manhattan. He grew up in Clinton, Michigan, and lives in San Diego with his wife and two children.