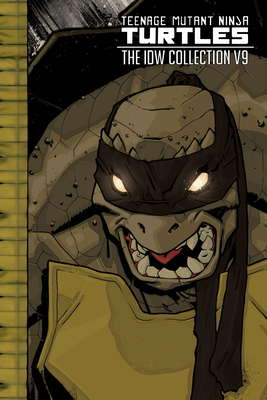 This is book number 9 in the TMNT IDW Collection series.

Agent Bishop's long-gestating hunt for mutants begins in earnest and no one is safe! The Mutanimals are the first targets, but the Turtles' turn will come soon enough, and they'll be hounded like never before. Alopex and Nobody are looking for a little rest and relaxation but get more than they ask for when they become the unwilling guests of a never-ending party thrown by the hedonistic Toad Baron! Plus, Karai has always embodied the Foot Clan. With the Clan under the control of Splinter, what path will she take during her travels in Japan? Danger and intrigue await her, Koya, and Bludgeon!

Tom Waltz is a former active duty U.S. Marine, Desert Storm vet, and former California National Guard Military Policeman. He is an editor for IDW Publishing, as well as the writer of critically-acclaimed graphic novels, including Teenage Mutant Ninja Turtles, The Last Fall, Children of the Grave, Finding Peace (with Nathan St John), After the Fire, Silent Hill: Sinner's Reward, Silent Hill: Past Life, Silent Hill Downpour: Annie's Story, and others. He has also worked on video games, including as co-writer for Silent Hill: Downpour (Konami), and writer for Ghostbusters: Sanctum of Slime (Atari), TMNT: Brothers Unite (Paramount), and TMNT: Mutants in Manhattan (Activision). He grew up in Clinton, Michigan and makes his home in San Diego with his wife and two children.