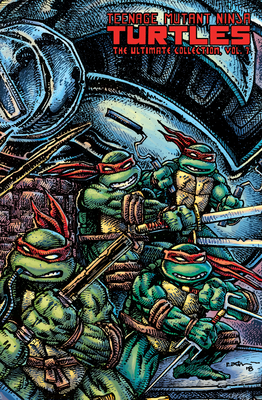 This is book number 7 in the TMNT Ultimate Collection series.

All the covers and development art from the earliest days of Mirage Studios in one archival collection with notes from co-creator Kevin Eastman!

From finished pieces to the the original sketches, pencils, inks, and paintings, including behind-the-scenes insights and never-before-seen works made available through the incredible archives of Kevin Eastman and Peter Laird!

Also includes photos from the early days in the original studio and appearances at conventions. A must-have volume for Turtles fans and collectors.
Kevin Eastman is the co-creator, with Peter Laird, of the Teenage Mutant Ninja Turtles, a pop-culture juggernaut that appeared in 1984 and has since spawned four animated television series, six feature films, countless toys, and numerous comic-book series, the most recent of which is published by IDW and is the longest-running to date. Kevin lives in San Diego with his wife and son.