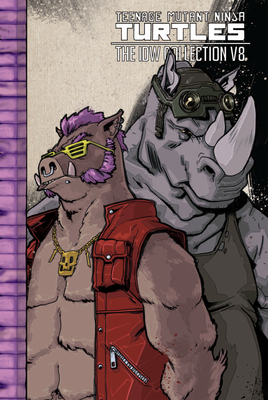 This is book number 8 in the TMNT IDW Collection series.

Bebop and Rocksteady stumble across a time-travel scepter, kickstarting the craziest, most destructive adventure yet! Then, when a mysterious new mutant targets Baxter Stockman, it will be up to the TMNT to reluctantly save him, but little does anyone know that a larger trap is being laid by a new arch-foe. Plus, Donatello reboots a new and improved Metalhead only to find that the robot no longer functions entirely as designed.

Tom Waltz is a former active duty U.S. Marine, Desert Storm vet, and former California National Guard Military Policeman. He is an editor for IDW Publishing, as well as the writer of critically-acclaimed graphic novels, including Teenage Mutant Ninja Turtles, The Last Fall, Children of the Grave, Finding Peace (with Nathan St John), After the Fire, Silent Hill: Sinner's Reward, Silent Hill: Past Life, Silent Hill Downpour: Annie's Story, and others. He has also worked on video games, including as co-writer for Silent Hill: Downpour (Konami), and writer for Ghostbusters: Sanctum of Slime (Atari), TMNT: Brothers Unite (Paramount), and TMNT: Mutants in Manhattan (Activision). He grew up in Clinton, Michigan and makes his home in San Diego with his wife and two children.