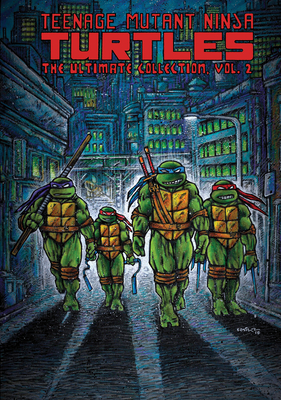 This is book number 2 in the TMNT Ultimate Collection series.

A thorough look back at the TMNT's comic book roots with the original stories plus insightful annotations from co-creators Kevin Eastman and Peter Laird.

Rediscover the underground roots of Teenage Mutant Ninja Turtles, with this special collection of Mirage Studios' issues #8-11 along with the Michelangelo, Donatello, and Leonardo Micro-Series one-shots by creators Kevin Eastman and Peter Laird! With over 300 pages of mutated-martial arts action along with annotations following each issue, this volume is perfect for fans to relive the glorious days of the Turtles' origins as well as an excellent place for new readers to see where the TMNT phenomenon began.

Issue #8 is the famous Cerebus crossover with Dave Sim.
Kevin Eastman - Born in 1962 in Portland, Maine, Kevin began drawing as soon as he was able to hold a crayon. His discovery of comic books gave meaning to his crazed doodling. When Kevin discovered and studied the work of Jack Kirby, Russ Heath, Richard Corben, Vaughn Bode and John Severin, he began to hone his craft. His first published work appeared in 1980, a year or so before he met Peter Laird. In May 1984, he and Laird published Teenage Mutant Ninja Turtles #1, creating the hit heroes in a half-shell. Eastman co-writes Teenage Mutant Ninja Turtles for IDW and can sometimes be found at the San Diego Comic Art Gallery.