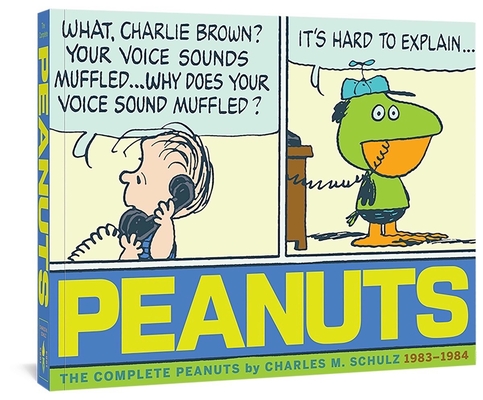 This volume of The Complete Peanuts is particularly romance-heavy as the Charlie Brown/Peppermint Patty/Marcie triangle heats up; love blossoms between two of the “Beagle Scout” birds; and Linus still refuses to be Sally’s “Sweet Babboo”! Meanwhile, Peppermint Patty goes to the “sleep disorders center” to find out why she’s always nodding off in class; Charlie Brown becomes, in his worst baseball-related humiliation to date, the mascot of Peppermint Patty’s “Pelicans”; Linus finally gives up his security blanket once and for all; and Snoopy’s brother Spike pops up in hilarious, deadpan vignettes set in far-flung Needles, California.

The Complete Peanuts is the reprint project that launched a renaissance in comic strip publishing and the only place Charles M. Schulz’s classic has ever been collected in its entirety. Featuring impeccable production values, each volume of this series features two successive years of newspaper strips (dailies and Sundays), plus bonus material such as celebrity introductions, interviews, and a brief biography of Schulz himself.

“Encountering Peanuts for the first time is a treat, like rekindling an old friendship.” — Leonard Maltin, from his foreword

Charles M. Schulz was born November 25, 1922, in Minneapolis. His destiny was foreshadowed when an uncle gave him, at the age of two days, the nickname Sparky (after the racehorse Spark Plug in the newspaper strip Barney Google). His ambition from a young age was to be a cartoonist and his first success was selling 17 cartoons to the Saturday Evening Post between 1948 and 1950. He also sold a weekly comic feature called Li'l Folks to the local St. Paul Pioneer Press. After writing and drawing the feature for two years, Schulz asked for a better location in the paper or for daily exposure, as well as a raise. When he was turned down on all three counts, he quit.

He started submitting strips to the newspaper syndicates and in the spring of 1950, United Feature Syndicate expressed interest in Li'l Folks. They bought the strip, renaming it Peanuts, a title Schulz always loathed. The first Peanuts daily appeared October 2, 1950; the first Sunday, January 6, 1952. Diagnosed with cancer, Schulz retired from Peanuts at the end of 1999. He died on February 13, 2000, the day before Valentine's Day-and the day before his last strip was published, having completed 17,897 daily and Sunday strips, each and every one fully written, drawn, and lettered entirely by his own hand — an unmatched achievement in comics.

Leonard Maltin is best known as a film critic, who, for many years, released an eponymous movie review guide.