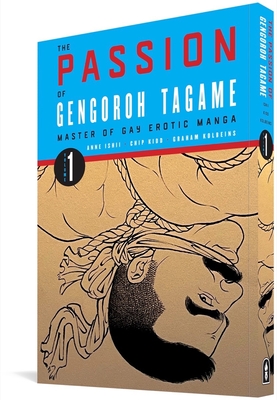 A classic comics collection from "The Tom of Finland of Japan," now in paperback!

The often violent, visceral, and always provocative style of Japanese manga legend Gengoroh Tagame, one of the originators of Japanese bear culture, comes to life like never before in The Passion of Gengoroh Tagame, a new edition of the artist's first English-language collection. Known as "The Tom of Finland of Japan," Tagame is celebrated around the world for his groundbreaking work, noted for its masterfully crafted imagery and unbridled exploration of bondage, lust, passion, and romance. This first English paperback edition includes ten short stories dating from the late 1990s to the early 2010s, with an introduction by celebrated novelist and biographer Edmund White, as well as an essay and new jacket design by acclaimed novelist and graphic designer Chip Kidd. Featuring intense, explicit, over-the-top scenes of BDSM among hypermasculine men, The Passion of Gengoroh Tagame is a must-have for Tagame fans, as well as fans of bear cultures in general. Produced by veteran “Japanist” Anne Ishii and filmmaker Graham Kolbeins, the book also contains sixteen full-page color illustrations.

(Please note: This book is a traditional work of manga, and reads back to front and right to left.)

Gengoroh Tagame (b. 1964) is a legend in gay comics throughout the world and in the American underground. Tagame’s artwork has been exhibited internationally, and he was the founding Editor and Art Director of Japan’s most widely-circulated gay journal, G-Men.

Edmund White is a novelist and essayist whose works include The Joy of Gay Sex (1977) and A Saint from Texas (2020).

Chip Kidd is best known for his iconic book jackets but is also a novelist, archivist, and influencer in the world of cartooning and pop culture. He lives in New York, NY.

Anne Ishii is a writer and the Executive Director of Asian Arts Initiative in Center City Philadelphia.

Graham Kolbeins is a Canadian queer filmmaker, writer, and designer living in southern California. He co-founded Massive Goods with Anne Ishii in 2013.

"[Tagame] demonstrates the ways in which sex and sexuality touch every aspect of our lives, and the way those things are, in turn, touched by other aspects of life."
— The AV Club