Code Of Honor And Other Stories (The EC Comics Library) (Hardcover) 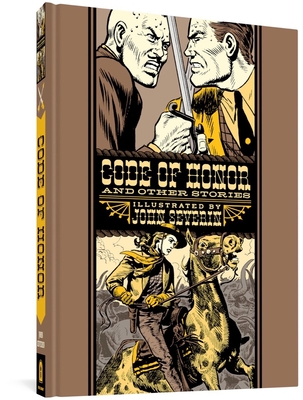 Code Of Honor And Other Stories (The EC Comics Library) (Hardcover)

When John Severin became editor of Two-Fisted Tales, he expanded the scope of its stories beyond its traditional war stories to head off to far-flung times and places, searching for adventure. This volume collects all those stories — the EC stories that Severin had the most control over. Severin wrote and drew the title story, about an old-fashioned Southern "gentleman" who sees grievance at every turn and regularly challenges those who are less skilled than he is to pistol duels. Is it murder when a man is defending his honor?

The other tales range from action and intrigue in the Old West to exploring for a lost city in the jungles of Peru, to facing danger in the Khyber Pass, to a Cold War chiller about the "ultimate weapon," to EC's only Vietnam story, "Dien Bien Phu!" Plus — the complete run of Severin's stories of globe-trotting two-fisted news photographer Steve Rampart, from the pages of Extra!. Severin was a master of detail, emotion, and reaction thanks to his precise, detailed line; it brought such realism to the page, it seems as if he is reporting from the scene.

BONUS: This volume also delves into the EC Pre-Trend era with a sampling of the work of lesser-known EC artists Lee J. Ames, Stan Ash, Ann Brewster, H.C. Kiefer, and Ed Waldman. Code of Honor And Other Stories, like its companion volumes, features extensive story notes and a Severin biography.

John Powers Severin (1921–2012; Will Eisner Hall of Fame, 2003), who had a "realistic" comics style,  specialized in war, western, and humor comics. One of Mad’s founding artists, he worked for with Cracked magazine for forty-five years.

Will Elder was an American illustrator and comic book artist who worked in numerous areas of commercial art but is best known for a frantically funny cartoon style that helped launch Harvey Kurtzman's Mad comic book in 1952. He was inducted into the Comic Book Hall of Fame in 2003.
The minute you looked at his artwork you knew you were looking at a John Severin illustration; it could be no one else. Besides his inimitable style, there was a feeling of total authenticity to whatever he drew, whether it was a Western, a crime story, a superhero saga or a science fiction yarn.
— Stan Lee