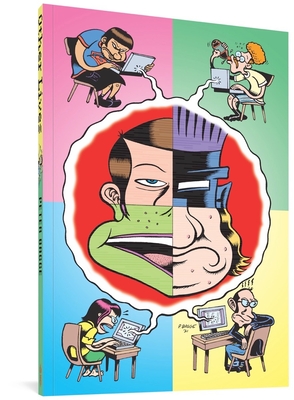 A darkly satirical graphic novel exploration — as only Hate comics creator Peter Bagge is capable of — of how people's identities, both real and created, become confused and conflated.

Other Lives follows three former college classmates: a self-loathing journalist whose family secret is the least of his problems; his girlfriend, whose obsession with getting married borders on Bridezilla status; a conspiracy theorist who may or may not work for the Homeland Security but definitely lives with his mother; and a divorced, unemployed gaming addict who lives in his car. While it's their past that unites them, it's their fabricated online identities — some more dangerous than others — that lead to their "real" lives colliding years later.

Originally published in 2010 by DC Comics' Vertigo imprint, Other Lives is Bagge's first post-Hate original graphic novel and has been out of print for several years. Fantagraphics is proud to publish this new edition, at a time when Bagge's oeuvre is enjoying renewed interest following the release of The Complete Hate in late 2020.

Peter Bagge  created Hate, one of the bestselling and most influential comic book series of the past quarter century. Born in New York in 1957, after graduating from the School of Visual Arts, Bagge contributed to and, along with R. Crumb, edited the underground anthology Weirdo. Bagge's numerous original graphic novels and collections of comics have won him multiple Harvey Awards, an Inkpot Award, and numerous Eisner Award nominations. He lives in Tacoma, WA.
This is prime Bagge that will surprise readers with its artistic maturity and a plot that is in no way predictable.
— Publishers Weekly

Secret identities, a comic-book staple ever since Clark Kent, here receive grimly humorous treatment for the twenty-first century. Bagge gives us a quartet of neurotic misfits [who] could be grown-up versions of characters from Hate. What ties them most firmly to their precursors is Bagge's distinctively wild, broadly cartoony drawing style. Rather than undermining the serious themes that underlie the story, however, Bagge's loopy visual idiom effectively reinforces the characters' pathetic-but-humorous, self-delusional nature.

A compelling (and very funny) examination of the creepy duality of modern existence by a comic book master at the height of his powers.
— Daniel Clowes

Bagge has always had a knack for tapping into the culture and showing how it brings out the worst in us. ... Other Lives explores the pop culture and cyberculture that makes us question ourselves, think we’re not good enough or who we want to be while giving us the opportunity to recraft our identity.

— From Cover to Cover