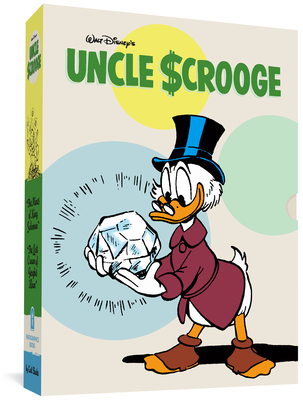 In two volumes snugged into a sturdy slipcase, 440 pages of Barks's brilliance — at a special price that even Uncle Scrooge couldn't resist!

A double dose of Duck adventure for the holidays, two volumes snugged into a sturdy slipcase — at a special price that even Uncle Scrooge couldn't resist! This season's Carl Barks Library 440-page gift box collects Walt Disney’s Uncle Scrooge: "The Lost Crown of Genghis Khan," in which Genghis Khan's missing crown, an expedition underground, and pirate treasure are to be found. Also: Walt Disney’s Uncle Scrooge: "The Mines of King Solomon," which includes a rip-roaring adventure to locate the lost treasure of King Solomon!

Carl Barks (1901-2000, b. Merrill, Oregon; d. Grants Pass, Oregon), one of the most brilliant cartoonists of the 20th century, entertained millions around the world with his timeless tales of Donald Duck and Barks’s most famous character creation, Uncle Scrooge. Over the course of his career, he wrote and drew more than 500 comics stories totaling more than 6,000 pages, most anonymously. He achieved international acclaim only after he semi-retired in 1968. Among many other honors, Barks was one of the three initial inductees into the Will Eisner Comic Awards Hall of Fame in 1987. (The other two were Jack Kirby and Will Eisner.) In 1991, Barks became the first Disney comic book artist to be recognized as a “Disney Legend,” a special award created by Disney “to acknowledge and honor the many individuals whose imagination, talents, and dreams have created the Disney magic.” He has been similarly honored in many other countries around the world.
Enormously well crafted and equally enormously entertaining, timeless comedy adventures … the perfect gift for just about any reader of comics, regardless of age, background, or experience.
— School Library Journal

A priceless part of our literary heritage.
— George Lucas