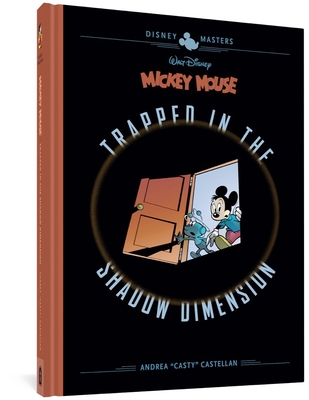 Mickey Mouse is up against menacing shadows, monster robots, and a dimension of danger in epic comics adventures by modern-day Disney fan favorite Andrea "Casty" Castellan!

All of Mouseton is swooning over the odd "Mr. Benevolence," a masked philanthropist who can't stop doing good — or can he? Mickey thinks he's behind the vanishing of the atomic genius Dr. Einmug — and the arrest of Einmug's otherworldly helper, Atomo Bleep-Bleep! But things get strange when the villainous Pegleg Pete turns up where Mickey least expects him: a "Shadow Dimension" in which fiction becomes fact!

Walking in the footsteps of Disney giants Floyd Gottfredson and Romano Scarpa, Italian writer/artist Andrea "Casty" Castellan is among today's most inspired and beloved Mickey Mouse comics creators. After many reader requests, Fantagraphics Books is thrilled to present the first Disney Masters volume by the beloved Disney cartoonist Casty!

And "Trapped in the Shadow Dimension'' is just the start! Also: in this volume, Scrooge McDuck squares off with "The Terrible, Terrible Triple-Dimensional Beagle Boy''… while in "The World to Come," Mickey and Minnie are headed to far-off Illusitania for royal intrigue, robot war… and a showdown with that dastardly, poetic secret agent, The Rhyming Man!

Andrea Castellan (b. Gorizia, Italy, 1967), known by his pen name “Casty,” made his Italian comics debut in 1994 as a scripter for Guido Silvestri’s Cattivik; in 1999, he began drawing for it as well. In 2003, Casty branched into Disney comics: first as a writer, then as an artist on Mickey Mouse adventures. Casty’s works, founded on the art style and continuity of Disney legends Romano Scarpa and Floyd Gottfredson, quickly made him a fan favorite.

Stefano Zanchi (b. Imperia, Italy, 1990) began drawing Italian Disney comics at 21, making him one of the youngest talents in the field at the time. Zanchi quickly rose from producing short gag stories to collaborating with larger creative teams on major Disney miniseries, including Duck Avenger and Donald Quest multi-part stories.

David Gerstein is an animation and comics researcher, writer, and editor best known for his work with The Walt Disney Company and its licensees. His published projects include Uncle Scrooge and Donald Duck: The Don Rosa Library (Fantagraphics, 2014-2018) and Mickey Mouse: The Ultimate History (with J.B. Kaufman; Taschen, 2018). He lives in North Carolina.
I loved these modern takes and storylines for Mickey Mouse that still brings a nostalgia feel of the popular Mickey Mouse stories of the past.
— Duck Talks