The Ultimate Football Trivia Book: 600 Questions for the Super-Fan (Paperback) 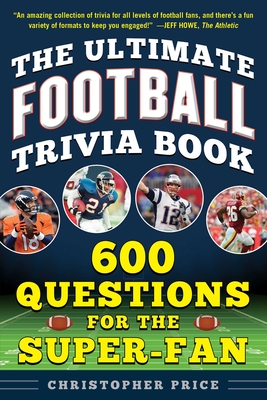 The Ultimate Football Trivia Book: 600 Questions for the Super-Fan (Paperback)


Not On Our Shelves—Ships in 1-5 Days
Become a football trivia expert with these tough questions!

The Ultimate Football Trivia Book tests and expands your knowledge on the sport of football—covering players’ careers from Draft Day to the rookie season, the Pro Bowl, and beyond! In this collection of six hundred questions, seasoned football writer Chris Price tests your level of expertise on all things football. Some of the many questions that Price poses include:

Football stars and coaches past and present are represented, from Johnny Unitas to Peyton Manning, Randy Moss to Tom Brady, Bart Starr to Aaron Rodgers, Bill Parcells to Bill Belichick and everyone in between.
The Ultimate Football Trivia Book is the definitive test for knowledgeable football fans!
Christopher Price is an award-winning sportswriter who covers the New England Patriots for the Boston Sports Journal. He is the author of several books on the Pats, including New England Patriots: The Complete Illustrated History, The Blueprint, and Drive for Five. Price resides outside of Boston.