Seven and a Half Tons of Steel: A Post-9/11 Story of Hope and Transformation (Paperback) 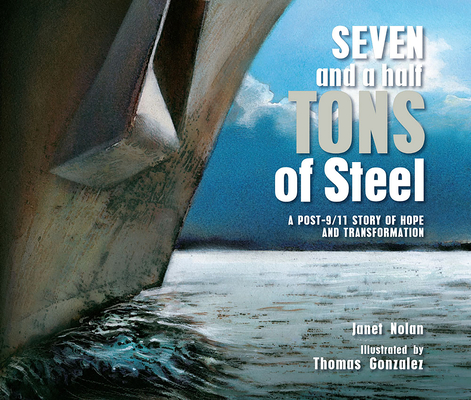 Seven and a Half Tons of Steel: A Post-9/11 Story of Hope and Transformation (Paperback)


On Our Shelves Now at:
A moving 9-11 story about the USS New York, a navy ship with a bow made from a World Trade Center Tower's beam.

Following the events of September 11, 2001, a beam from the World Trade Center Towers was given to the United States Navy. The beam was driven from New York to a foundry in Louisiana, where the seven and a half tons of steel, which had once been a beam in the World Trade Center, became a navy ship's bow.

Powerful text from Janet Nolan is paired with stunning illustrations from New York Times best-selling illustrator Thomas Gonzalez (14 Cows for America) in this inspiring story that reveals how something remarkable can emerge from a devastating event. Also includes details on shipbuilding. A beautiful book, perfect for American history and 9-11 studies.
Janet Nolan is the author of fiction, nonfiction, and historical fiction picture books. She has a BA from The Evergreen State College in Olympia, Washington, and a master's degree in urban planning and policy from the University of Illinois at Chicago. She lives in Illinois.

Thomas Gonzalez is an illustrator, designer, and portrait artist. A native of Cuba, he came to the United States when he was ten years old. He studied at the Atlanta School of Art (now called Savannah of Art and Design). After working at the Coca-Cola Company for more than twenty years, Tom held several creative positions with other global brands. He has illustrated many picture books, including the New York Times best-seller 14 Cows for America. He lives in Georgia.
"This beautiful, sober, and hopeful recounting of a difficult chapter in American history is a stellar addition to history collections." —School Library Journal

"Gonzalez's breathtaking spreads dazzle. . . The emphasis is not on damage and destruction, but on America's power to recover. Teachers and parents looking for picture books that celebrate the nation and its military will welcome Nolan and Gonzalez's work." —Publishers Weekly

"A deeply felt but not overwrought telling of a story that will be new to most young readers." —Kirkus Reviews