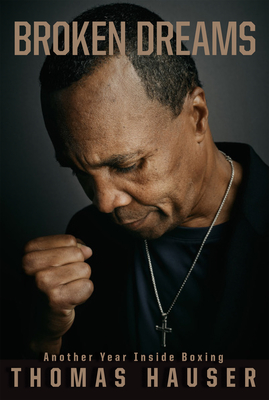 Each year, readers, writers, and critics alike look forward to Thomas Hauser’s newest collection of articles about the contemporary boxing scene. As Booklist has proclaimed, “Many journalists have written fine boxing pieces, but none has written as extensively or as memorably as Thomas Hauser. . . . Hauser remains the current champion of boxing. . . . Hauser is a treasure.”

Broken Dreams meets this high standard with its coverage of 2020’s most important fighters and fights, outside-the-ring controversies, regulatory missteps, and other issues that defined the year’s boxing scene. Hauser explores the heavyweight trio of Tyson Fury, Anthony Joshua, and Deontay Wilder in depth, as well as Canelo Álvarez and historic greats like Jack Dempsey, Carlos Monzon, and Muhammad Ali.

Hauser also tackles the larger social challenges that imposed themselves so assertively in 2020, including the coronavirus pandemic, the Black Lives Matter movement, runaway social media, the presidential election, and other forces that left a deep imprint on the sport and business of boxing.

Thomas Hauser is the author of fifty-four books, including Missing, which was made into an Academy Award–winning film, and Muhammad Ali: His Life and Times, the definitive biography of boxing’s most celebrated figure. The Boxing Writers Association of America has honored Hauser with the Nat Fleischer Award for Career Excellence in Boxing Journalism. More recently, Hauser was selected for boxing’s highest honor—induction into the International Boxing Hall Fame.
“Two hundred years from today, if mankind still exists, folks interested in the goings-on in the world of boxing during the first decades of the 21st century will be directed to the writings of Thomas Hauser. And I have no doubt that a complete set of his annual anthologies will be a prized collectible.”
—Arne K. Lang, The Sweet Science, October 2021