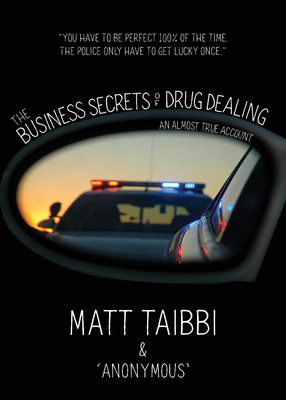 In real life, there is a person like "Anonymous", who, for the sake of this story, I'll call Huey Carmichael. I was friends with this person for a while before I learned about his other life. The real Huey knows more than a thing or two about the weed business. He keeps rules.

The Business Secrets of Drug Dealing tells the story of a hyper-observant, politically-minded, but humorously pragmatic weed dealer who has spent a working life compiling rules for how to a) make money and b) avoid prison.

Each rule shapes a chapter of this fast-paced outlaw tale, all delivered in Huey's deliciously trenchant argot. Here are a few of them:
- No guns but keep shooters.
- Stay behind the white guy.
- Don't snitch.
- Always have a job.
- Be multi-sourced.
- Get your money and get out.

Part edge-of-the-seat suspense story, part how-to manual in the tradition of The Anarchist Cookbook, The Business Secrets of Drug Dealing is as scintillating as it is subversive. Just reading it feels illegal.

Matt Taibbi is a contributing editor for Rolling Stone and winner of the 2008 National Magazine Award for columns and commentary. His most recent book is I Can't Breathe: A Killing on Bay Street, about the infamous killing of Eric Garner by the New York City police. He's also the author of the New York Times bestsellers Insane Clown President, The Divide, Griftopia, and The Great Derangement.