The Thunder Before the Storm: The Autobiography of Clyde Bellecourt (Paperback) 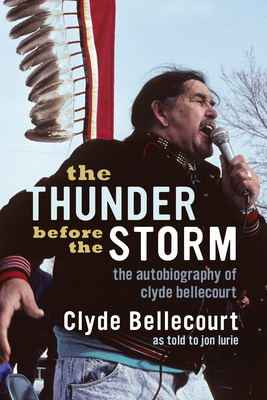 The Thunder Before the Storm: The Autobiography of Clyde Bellecourt (Paperback)


Not On Our Shelves—Ships in 1-5 Days
Legendary activist and AIM co-founder Clyde Bellecourt tells "the damn truth" about the American Indian Movement as he lived it. The American Indian Movement burst onto the scene in the late 1960s as indigenous people across the country began to demand what is rightfully theirs. Clyde Bellecourt, whose Ojibwe name translates as "The Thunder Before the Storm," was one of AIM's co-founders and iconic leaders. This powerful autobiography provides an intimate narrative of his childhood on the White Earth Reservation, his long journey through the prison system, and his embodiment of "confrontation politics" in waging war against entrenched racism. Bellecourt is up-front and unapologetic when discussing his battles with drug addiction, his clashes with other AIM leaders, his experiences on the Trail of Broken Treaties and at Wounded Knee, and the cases of Leonard Peltier and murdered AIM activist Anna Mae Aquash. This gritty, as-told-to memoir also uncovers the humanity behind Bellecourt's militant image, revealing a sensitive spirit whose wounds motivated him to confront injustice and to help others gain a sense of pride by knowing their culture. The Thunder Before the Storm offers an invaluable inside look at the birth of a national movement--the big personalities, the creativity, and the perseverance that were necessary to alter the course of Native and American history.
Clyde Bellecourt cofounded the American Indian Movement and has worked for Indian rights for decades. He lives in Minneapolis. Jon Lurie, educator and journalist, has worked in the Minneapolis Native American community for many years. He is a staff writer for The Circle and has written for numerous other publications.