While Time Remains: A North Korean Defector's Search for Freedom in America (Hardcover) 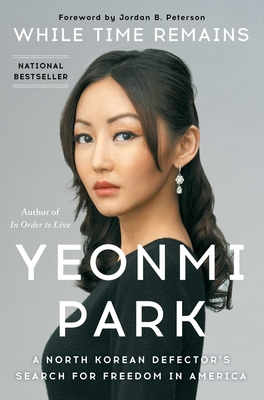 While Time Remains: A North Korean Defector's Search for Freedom in America (Hardcover)

By Yeonmi Park, Jordan B. Peterson (Foreword by)

After defecting from North Korea, Yeonmi Park found liberty and freedom in America. But she also found a chilling crackdown on self-expression and thought that reminded her of the brutal regime she risked her life to escape. When she spoke out about the mass political indoctrination she saw around her in the United States, Park faced censorship and even death threats.

In While Time Remains, Park sounds the alarm for Americans by highlighting the dangerous hypocrisies, mob tactics, and authoritarian tendencies that speak in the name of wokeness and social justice. No one is spared in her eye-opening account, including the elites who claim to care for the poor and working classes but turn their backs on anyone who dares to think independently.

Park arrived in America eight years ago with no preconceptions, no political aims, and no partisan agenda. With urgency and unique insight, the bestselling author and human rights activist reminds us of the fragility of freedom, and what we must do to preserve it.
Yeonmi Park is a North Korean defector and human rights activist. She escaped the brutal Kim dictatorship as a teenager only to fall victim to sex trafficking in China, before escaping to South Korea by walking across the Gobi Desert. Eventually making her way to America, where she is now a citizen, Park has dedicated her life to bringing attention to the horrors and atrocities taking place in her home country and in China. Park is also the author of the international bestseller In Order to Live: A North Korean Girl’s Journey to Freedom. She is a graduate of Columbia University and lives in New York City.