Turkish-Qatari Relations: From Past to Present in a Turbulent Geopolitical Landscape (Hardcover) 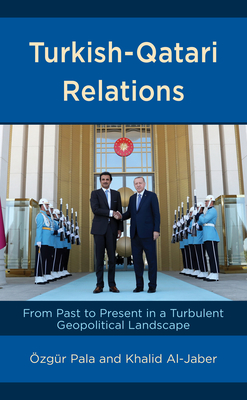 Turkish-Qatari Relations: From Past to Present in a Turbulent Geopolitical Landscape (Hardcover)


Not On Our Shelves—Ships in 1-5 Days
This book examines domestic and regional geopolitical dynamics behind Turkish-Qatari relations from the past to the present. Utilizing arguments of practical geopolitical reasoning, zg r Pala and Khaled Al-Jaber situate their analysis of evolving relations in the contexts of Ottoman-British geopolitical rivalry in the Persian Gulf, the Turkish Republic's fluctuating relations with the Middle East until the 2000s, the AKP governments' opening to the region and finally the Arab Spring and its aftermath. Contextualizing the trajectory of Turkish-Qatari relations within the larger Middle East and the Gulf Arab region, the authors argue that material interests and identity politics have generally determined relations until the turn of the millennium. Under Erdogan and Sheikh Hamad's assertive leadership and ambitious foreign policy, Turkey and Qatar came to witness various foreign policy convergences on critically important regional issues. Pala and Al-Jaber argue that these convergences, coupled with their geopolitical and security goals, facilitated a political alignment between Ankara and Doha throughout the Arab Spring. They argue that despite facing major geopolitical setbacks, Turkey and Qatar were able to chart a much deeper cooperation, which later evolved into a strategic partnership in various areas.