Labor Pains: A Tale of Kicking, Discomfort, and Joy on the Broadcasting Delivery Table (Hardcover) 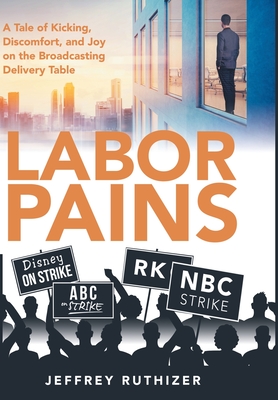 Labor Pains: A Tale of Kicking, Discomfort, and Joy on the Broadcasting Delivery Table (Hardcover)

For well more than a century, unions and companies have experienced a state of push and pull. Confrontations occasionally led to war. Some battles became legend. Hollywood movies were made and books were written. Because the broadcasting industry is in the public eye, its labor struggles often became very familiar to the American audiences. But much remained behind the curtain.

A battlefield commander at the bargaining table for more than four decades while at ABC, NBC, RKO, and The Walt Disney Company, author Jeff Ruthizer was not just a participant in but was also a major strategist handling the peace and struggles with actors, technicians, directors, musicians, and writers. His companies were, and remain, world famous.

In Labor Pains, he tells the story of gaining his sea legs in his early days of his first tour of duty at ABC during broadcasting's Golden Age of the 1960s. He gradually rose in the industry to assume top labor command upon his two-decade return to ABC before retiring in 2009. Legendary titans up to and including his last CEO, Disney's Bob Iger, ran these companies and looked to Ruthizer for advice.

Slugging it out when necessary, through the bitterness of unwanted strikes and lockouts, Ruthizer narrates tales of kicking, discomfort, and ultimately joy on the broadcasting industry delivery table. Interspersed between turbulent times were moments of calm necessary to prepare both the body and the soul for the next battle looming on the horizon.