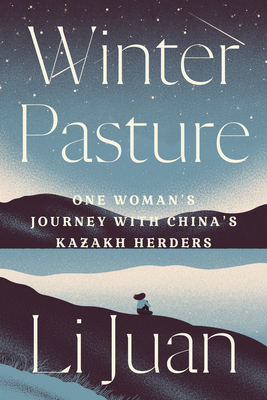 
In Stock—Click for Locations
Named one of The Washington Post's Best Travel Books of 2021.

Winner of the People's Literature Award, WINTER PASTURE has been a bestselling book in China for several years. Li Juan has been widely lauded in the international literary community for her unique contribution to the narrative non-fiction genre. WINTER PASTURE is her crowning achievement, shattering the boundaries between nature writing and personal memoir.

Li Juan and her mother own a small convenience store in the Altai Mountains in Northwestern China, where she writes about her life among grasslands and snowy peaks. To her neighbors' surprise, Li decides to join a family of Kazakh herders as they take their 30 boisterous camels, 500 sheep and over 100 cattle and horses to pasture for the winter. The so-called "winter pasture" occurs in a remote region that stretches from the Ulungur River to the Heavenly Mountains. As she journeys across the vast, seemingly endless sand dunes, she helps herd sheep, rides horses, chases after camels, builds an underground home using manure, gathers snow for water, and more. With a keen eye for the understated elegance of the natural world, and a healthy dose of self-deprecating humor, Li vividly captures both the extraordinary hardships and the ordinary preoccupations of the day-to-day of the men and women struggling to get by in this desolate landscape. Her companions include Cuma, the often drunk but mostly responsible father; his teenage daughter, Kama, who feels the burden of the world on her shoulders and dreams of going to college; his reticent wife, a paragon of decorum against all odds, who is simply known as "sister-in-law."

In bringing this faraway world to English language readers here for the first time, Li creates an intimate bond with the rugged people, the remote places and the nomadic lifestyle. In the signature style that made her an international sensation, Li Juan transcends the travel memoir genre to deliver an indelible and immersive reading experience on every page.
Born in Xinjiang in 1979, Li Juan grew up in Sichuan Province. In her youth, she learned to sew and run a small convenience store with her mother, living in a town where nomads shopped. Later, she worked in a factory in the city of Urumqi. In 2003, she became a public servant until 2008 when she became a full time author. Her writing career began in 1999, as a columnist for newspapers like Southern Weekly and Hong Kong's Wenweipo. Widely regarded as one of the best narrative nonfiction writers of her generation, Li Juan's writing has won several awards. WINTER PASTURE is considered to be her most popular and representative work.
"Part travelogue and part cultural exchange, the book luxuriates in wide-open spaces and the simple wonder of the everyday... The book balances both beauty and accessibility on every page.”
—Named one of '51 favorite books of 2021' by the Washington Independent Review of Books

"Near the end of Winter Pasture Li Juan asks herself what it means to be “a passerby” in the lives of others. Her intimate depiction of a family of Kazakh herders is itself an answer to that complicated travel writer question: to connect the reader with people and stories she likely otherwise would never encounter.  In doing so, Li Juan is an empathetic, interrogative, and entertaining chronicler. She offers up a fascinating portrait of life in one of the world’s most remote corners."
—Rachel Friedman, author of The Good Girl's Guide to Getting Lost and And Then We Grew Up

"More than just an exotic travel diary, Winter Pasture reflects on the relationships not just between humans and nature in the harshest of environments, but also between the Han Chinese and China’s Kazakh minority.”
—Nicky Harman, Literary Hub