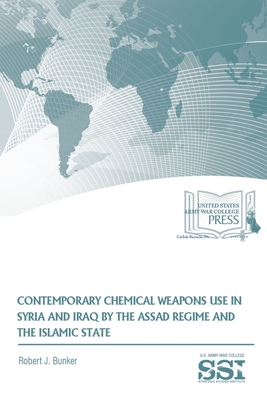 This monograph features chemical weapons programs of the Assad regime and the Islamic State (IS). And according to the monograph's publisher, at the Strategic Studies Institute (SSI), in general, chemical weapons and their contemporary use has historically been understudied. Therefore, this title provides U.S. Army, Department of Defense, and U.S. Government policymakers, and you, if engaged in Middle East strategic matters and/or the use of chemical weapons, a highly useful resource on a highly controversial, universally outlawed "weapon".

This SSI monograph focuses on the use of chemical weapons in battle, and given continued use by the Assad regime, a timely and insightful analysis.

The monograph contains an introduction into the subject matter, provides an overview of the chemical warfare capabilities of the Assad regime and the IS, addresses their contemporary use of chemical weapons in Syria and Iraq, and highlights the ensuing lessons learned.

SSI notes this work can be treated as an applied counter-chemical warfare policy document. Some of its features address inherent military functions in that they can be used to: