Without Getting Killed or Caught: The Life and Music of Guy Clark (John and Robin Dickson Series in Texas Music, sponsored by the Center for Texas Music History, Texas State University) (Paperback) 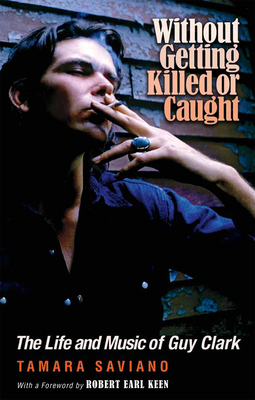 Without Getting Killed or Caught: The Life and Music of Guy Clark (John and Robin Dickson Series in Texas Music, sponsored by the Center for Texas Music History, Texas State University) (Paperback)


Not On Our Shelves—Ships in 1-5 Days
Winner, 2016 the Belmont Book Award, Sponsored by the International Country Music Conference

For more than forty years, Guy Clark wrote and recorded unforgettable songs. His lyrics and melodies paint indelible portraits of the people, places, and experiences that shaped him. He has served as model, mentor, supporter, and friend to at least two generations of the world’s most talented and influential singer-songwriters. In Without Getting Killed or Caught: The Life and Music of Guy Clark, writer, producer, and music industry insider Tamara Saviano chronicles the story of this legendary artist from her unique vantage point as his former publicist and producer of the Grammy-nominated album This One’s for Him: A Tribute to Guy Clark. Part memoir, part biography, Saviano’s skillfully constructed narrative weaves together the extraordinary songs, larger-than-life characters, previously untold stories, and riveting  emotions that make up the life of this modern-day poet and troubadour.

“Any well-written biography will lay out accomplishments and milestones accurately, but only the exceptional ones transport you deep inside their subject's world, so that when you put the book down it takes you a minute to re-adjust.”—Mojo

Producer of Beautiful Dreamer: The Songs of Stephen Foster, which won the 2005 Grammy Award for Best Traditional Folk Album, TAMARA SAVIANO is a publicist and producer living in Nashville. She is also former managing editor of Country Music magazine and produced the 2012 Americana Album of the Year, This One’s for Him: A Tribute to Guy Clark.
"Take the dean of the Texas school of songwriting; mix in his wife, Susanna, an ethereal painter and an accomplished songwriter herself; add in their tragic friendship with Townes van Zandt, a tortured genius; and tell it all through the eyes of their friend, Tamara Saviano, one of the most gifted of Nashville chroniclers. With that, you have this book, a haunting account of the fiercely independent Guy Clark, and the ‘70s songwriting scene that swirled around him, hoping to find its own way to the other side of the sky." — Alanna Nash, author of The Colonel: The Extraordinary Story of Colonel Tom Parker and Elvis Presley

"I can see every picture and every character Guy wrote about in his songs. I can't wait to read the book and fill in the missing pieces of my friend who I knew for 40 years" -Vince Gill
— Vince Gill

“Saviano has patiently compiled a must-have edition to the library of any actual or amateur musicologist, and a compelling story of love, friendship, tragedy and cultural magic for the rest of us.”—Lone Star Book Reviews

“Saviano captures the full story of an extraordinary life and talent, told with both an unwavering honesty and loving admiration”—Austin Chronicle

"reads like an Americana version of Jack Kerouac's On the Road . . . If this were a record, it'd be my record not of just the year, but of the decade."—No Depression
— No Depression