Anglo-Saxon Kingdoms: A Captivating Guide to the History of Wessex and Mercia (Hardcover) 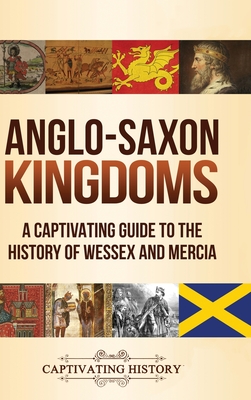 Anglo-Saxon Kingdoms: A Captivating Guide to the History of Wessex and Mercia (Hardcover)

If you want to discover the captivating history of Wessex and Mercia, then keep reading...

Two captivating manuscripts in one book:

The Anglo-Saxon Kingdom of Wessex was created through conquest by the Germanic tribe known as the Gewisse. For the following five hundred years, this kingdom went through various transformations. Some even argue that those transformations were nothing more than the natural development of a society. However, while the other Anglo-Saxon kingdoms prospered and rose to be a significant power in the region just to fall from grace and be consumed in the events of the period, Wessex pressed on. It, too, came close to its downfall when it seemed that Mercia, a neighboring kingdom, would prevail in the constant struggle for domination. However, Wessex showed that it could thrive even under the pressure of other, much stronger forces.

The Kingdom of Mercia lasted for more than five hundred years. Such a long period of time brought change to all aspects of Mercian life, and it is the role of history and this book to follow that change through the centuries. But it wasn't just the kings and queens that changed. The events of the period resonated within social and cultural life, religious beliefs, artistic expression, and trade. Everything evolved under the patronage of Mercia.

Some of the topics covered in part 1 of this book include:

Some of the topics covered in part 2 of this book include:

So if you want to learn more about Wessex and Mercia, scroll up and click the "add to cart" button