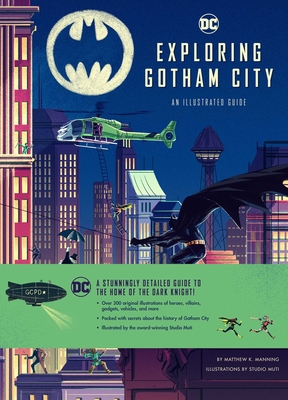 
Special Order—Subject to Availability
"Lavishly illustrated by Studio Muti, Exploring Gotham City is the perfect book for readers of all ages who want to investigate the tumultuous city Batman calls home." – Sandbox World

Explore Gotham City, home of the mysterious crime fighter the Batman! From the depths of the Batcave to Wayne Manor, Arkham Asylum, and beyond, these pages take you on a fully illustrated journey through the crime-riddled city. Inside you'll learn all about Gotham City's shadowy history, encounter infamous villains from The Joker to the Penguin, and find out what the Batman, Robin, and other heroes are doing to stop them.
Matthew K. Manning is the author of over eighty books and dozens of comic books. He has written books for Scholastic, Disney Press, Abrams, Capstone, DK Publishing, Running Press, Andrews/McMeel, and Insight Editions, dividing his time between writing original chapter book series and coffee table books. Many of his books have reached best-seller status on Amazon, including DC Comics: Anatomy of a Metahuman, DC Comics Encyclopedia, and Batman: A Visual History.

In addition, Manning has written comic books for DC Comics, Marvel, IDW, and several other publishers. He is best known for the monthly Marvel Action: Avengers series as well as the miniseries Batman/Teenage Mutant Ninja Turtles Adventures, the latter nominated by the Diamond Gem Awards for comic of the year. He currently lives in Asheville, North Carolina with his wife Dorothy and his daughters Lillian and Gwendolyn. Follow him online at www.matthewkmanning.com.

MUTI is a creative studio based in Cape Town, South Africa, consisting of illustrators, designers and animators who are passionate about producing original and inspiring artwork. Clients include Google, Facebook, Uber, Airbnb, Nike, Goop, Fortnite, and more.