The Decline of the West, Two Volumes in One (Hardcover) 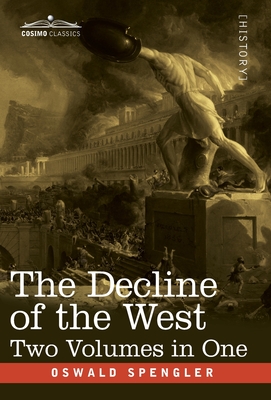 The Decline of the West, Two Volumes in One (Hardcover)

" ...the World-War was no longer a momentary constellation of casual facts due to national sentiments, personal influences, or economic tendencies, ...but the type of a historical change of phase occurring within a great historical organism of definable compass at the point preordained for it hundreds of years ago." --Oswald Spengler, Decline of the West Vol. I, 1914

The Decline of the West by German historian Oswald Spengler, originally published in German as Der Untergang des Abendlandes (Vols. I and II in resp. 1918 and 1922), became an instant success in Germany after its defeat in World War I. Spengler's description of the end of the Western world and the implication that Germany was part of this larger historical process resonated with the German readers. He described great cultures following a cycle from inception to expansion followed by death. By understanding this cycle, one could reconstruct the past and predict the future. He specifically predicted that in the final stage of Western civilization, in the 20th century, Caesarism, a new and overpowering leadership would arise, replacing individualism, liberalism and democracy.

Even though this book was criticized by scholars, it became a bestseller in the 1920s and laid the foundation for the social cycle theory, which states that stages of history generally repeat themselves in cycles.