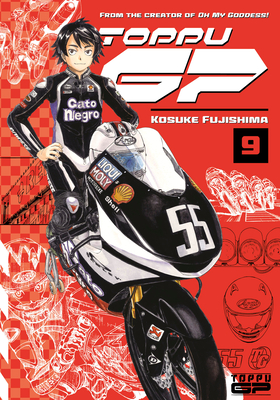 This is book number 9 in the Toppu GP series.

From the creator of Oh My Goddess! comes a manga dedicated to the thrilling world of motorcross!
Ages 16 and up.

RACING TO THE TOP
Toppu Uno, a young boy fascinated by the heart-pumping and jaw-droppingly dangerous world of Motorcross, is determined to take on the world alongside his idol, Myne, and his rival, Takadai. After placing ﬁrst in several name-making championships, Toppu is recognized as a top contender and receives an invitation to join a Moto3 team. Will he be able to keep up with his rivals during his ﬁrst world championship race? Or will they give him a run for his money?!

Kosuke Fujishima is the creator of Oh My Goddess!, one of the longest-running and most successful manga and anime franchises in the U.S.