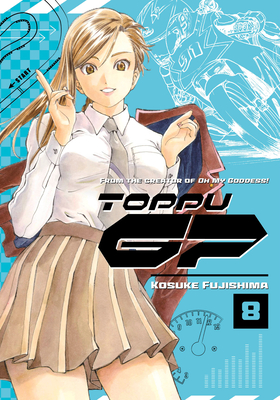 This is book number 8 in the Toppu GP series.

From the creator of Oh My Goddess! comes a manga dedicated to the thrilling world of motorcross!
Ages 16 and up.

A TEST OF SKILL

Uno Toppu is a young boy, fascinated by the world of Motocross racing, where one tiny mistake is all that lays between the shame of the defeat or the glory of first place! With his eyes set on the world championship title, Toppu and his biggest rival, Takadai, struggle to find the perfect balance between racing and schoolwork. Meanwhile, Myne is forced into an unexpected situation that will put her skills to the ultimate test!
Kosuke Fujishima is the creator of Oh My Goddess!, one of the longest-running and most successful manga and anime franchises in the U.S.