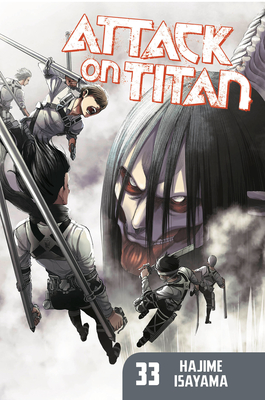 This is book number 33 in the Attack on Titan series.


Once hailed as humanity’s greatest hope, Eren has since become unrecognizable. With the Attack Titan now morphed into a grotesque, colossal skeleton of its former self, Eren continues to control the wave of Titans laying waste to the world, extinguishing countless homes, towns, and lives in their wake. In order to salvage what’s left of humanity, Mikasa, Armin, and the Survey Corps decide to confront Eren head-on. But to stop the Rumbling, they’ll have to dedicate much more than their hearts...

With his debut series, "Attack on Titan," Hajime Isayama has enjoyed a meteoric rise from unknown to one of Japan's top comics artists.