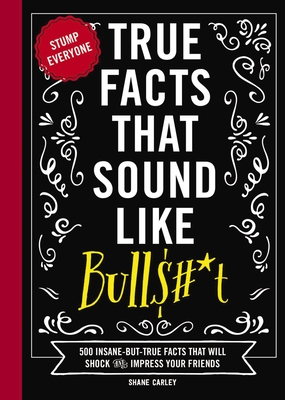 
Backordered
Prove you are the smartest schmuck in the room with 500 trivia facts that sound absurd. These facts are so ridiculous some might even say that they sound like bull$#*t!

Prove you are the smartest schmuck in the room with 500 true trivia facts that sound absurd. These facts are so absurd some might even say that they sound like bull$#*t!

Knowledge is power! Crush the competition at trivia night, or start the most interesting conversation ever with real facts that are hard to believe. This book is loaded with mind-blowing facts that are sure to keep you wondering, "How are these even true?" while equipping you to outsmart everyone around and blow their minds. Topics include:

Put your game face on, and prove once and for all that you are the real know-it-all! Gather your friends and family 'round and get ready to learn some wild and crazy trivia and facts such as:

- True or False? A chicken once survived almost two years after having its head cut off.
- True or False? The dog that played Toto in The Wizard of Oz was paid a salary.
- How many baseballs does the MLB use every season?
- What state has jousting as its official sport?
- True or False? Most Canadians live south of Seattle.

Stump everyone with True Facts That Sound Like Bull$#*t!
Shane Carley was born in New Hampshire, and, after almost a decade in Washington, DC, he has triumphantly returned to the beautiful Granite State. A longtime aficionado of all types of alcohol, Shane jumped at the opportunity to launch a series of cocktail companion books. His love of the written word transcends formal publication, and he currently works as a content developer for award-winning PR agency Matter Communications. Shane is a science fiction enthusiast who hopes someday to make the jump into fiction writing. He once met Warren Ellis and it was the greatest moment of his life.