Still No Word from You: Notes in the Margin (Hardcover) 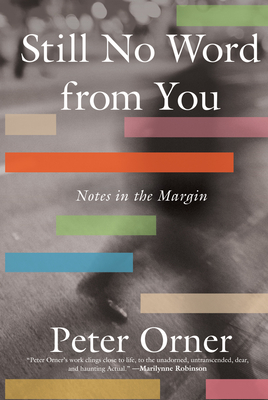 Still No Word from You: Notes in the Margin (Hardcover)


On Our Shelves Now at:
Longlisted for the PEN/Diamonstein-Spielvogel Award for the Art of the Essay

A new collection of pieces on literature and life by the author of Am I Alone Here?, a finalist for the NBCC Award for Criticism

Stationed in the South Pacific during World War II, Seymour Orner wrote a letter every day to his wife, Lorraine. She seldom responded, leading him to plead in 1945, “Another day and still no word from you.” Seventy years later, Peter Orner writes in response to his grandfather’s plea: “Maybe we read because we seek that word from someone, from anyone.”

From the acclaimed fiction writer about whom Dwight Garner of The New York Times wrote, “You know from the second you pick him up that he’s the real deal,” comes Still No Word from You, a unique chain of essays and intimate stories that meld the lived life and the reading life. For Orner, there is no separation. Covering such well-known writers as Lorraine Hansberry, Primo Levi, and Marilynne Robinson, as well as other greats like Maeve Brennan and James Alan McPherson, Orner’s highly personal take on literature alternates with his own true stories of loss and love, hope and despair. In his mother’s copy of A Coney Island of the Mind, he’s stopped short by a single word in the margin, “YES!”—which leads him to conjure his mother at twenty-three. He stops reading Penelope Fitzgerald’s The Beginning of Spring three quarters of the way through because he knows that finishing the novel will leave him bereft. Orner’s solution is to start again from the beginning to slow the inevitable heartache.

Still No Word from You is a book for anyone for whom reading is as essential as breathing.
PETER ORNER is the author of the novels The Second Coming of Mavala Shikongo and Love and Shame and Love and the story collections Esther Stories, Last Car Over the Sagamore Bridge, and Maggie Brown & Others. His previous collection of essays, Am I Alone Here?: Notes on Living to Read and Reading to Live, was a finalist for the National Book Critics Circle Award for Criticism. A three-time recipient of the Pushcart Prize, Orner’s work has appeared in The Best American Short Stories, The New York Times, The New Yorker, The Atlantic, The Paris Review, Granta, McSweeney’s, and has been translated into eight ­languages. He has been awarded the Rome Prize from the American Academy of Arts and Letters, a Guggenheim Fellowship, a two-year Lannan Foundation Literary Fellowship, the California Book Award for fiction, the Edward Lewis Wallant Award for Jewish fiction, as well as a Fulbright in Namibia. He is the director of creative writing at Dartmouth College and lives with his family in Norwich, Vermont.
Longlisted for the PEN/Diamonstein-Spielvogel Award for the Art of the Essay

"Orner is a highly lauded author whose writing, in both fiction and nonfiction, is an act of wizardry. In each of these micro-essays, he reduces the meat of his own life down to the bone, then stirs in fatty excerpts from hundreds of stories, novels and poems by writers ranging from Woolf to Rhys, Babel to Kafka. The resulting brew sometimes scalds, sometimes soothes, but always proves that literature can be a kind of sustenance." —Stephanie Elizondo Griest, The New York Times Book Review

“Like its predecessor collection Am I Alone Here?, a 2016 finalist for the National Book Critics Circle Award in criticism, Still No Word From You is a book of conversations: Orner in dialogue with other books, Orner in dialogue with himself . . . Still No Word From You looks at its author’s life through the lens of reading: memoir as daybook, as it were. In 107 short essays or chapters (some just a paragraph), Orner shapeshifts and time travels." —David Ulin, Los Angeles Times

"Yearning for lost time infuses every page of [Peter Orner's] second nonfiction collection . . . The book compiles 107 micro-essays that are part reader’s notebook and part, in his words, 'reluctant memoir.' It’s a meditation on storytelling from a wide-ranging thinker and reader, mining Orner’s past, generations of family history and the many fictional folks swirling around his mind." —Lisa Taggert, The San Francisco Chronicle

"If there’s an ideal autumn book, it’s a book about books, writers and reading. Still No Word From You: Notes in the Margin (Oct. 11), by the always undervalued Peter Orner, swings seamlessly between his Highland Park boyhood (a Cheever tale, writ large) and his reading life, mourning family, and even stumbling on his mother’s youthful marginalia." —Christopher Borrelli, Chicago Tribune

"A heartfelt memoir in books and marginalia . . . In Peter Orner’s Still No Word from You, literature and life are inextricably intertwined, each illuminating the other." —Julia M. Klein, The Forward

"Peter Orner’s new book, Still No Word From You, reads like a full expression of a mind, in a different way than a novel might be an expression of a mind . . . The tone is intimate, digressive, and personal, and the cumulative effect is a total immersion in the author’s way of seeing." —Emma Cline, Literary Hub

"Pushcart Prize–winning fiction writer Orner (Maggie Brown & Others) brings his lyrical, mosaic style to the story of his own life in this gorgeous and contemplative memoir. Blending photographs, family lore, speculation, and literary musings, Orner’s nonlinear narrative weaves through elliptical reflections and faint memories from his 1970s childhood to the sorrows and delights of his adulthood . . . When his fragmented ruminations loop back to a powerful impression or image or favorite book, the effect is like turning over a prism in one’s hands, catching vivid flashes of light at each angle. Evocative and erudite, this meditation on impermanence and its ephemeral joys is a gem." —Publishers Weekly (starred review)

“This is a unique concoction, with essays bleeding into stories, and coming out the other side, and creating something new. Still No Word from You is a beautiful piece of work that demonstrates the special illumination on life granted by a passion for reading.” ––Kevin Barry, author of Night Boat to Tangier

"What to call this gloriously strange marvel of a book devoted to other books? Who cares? Still No Word from You offers solace to those among us who look out windows, whose minds wander, who are bewildered by time and memory. It is an elegy to long-gone houses, bookstores, teachers, family, writers, and all of the murmuring dead; an ode to the parenthetical, which, it turns out, is not parenthetical at all; a beautiful testament to the way the books we love are not merely as real as life, they are life." ––Maud Casey, author of City of Incurable Women

"Still No Word from You is a sharp-edged and heartfelt mosaic of the reading life. I know of no other writer working today who so exquisitely and seamlessly brings together storytelling, memoir, essay, and the act of reading as both a visionary and an intimate journey." ––Eduardo Halfon, author of Mourning