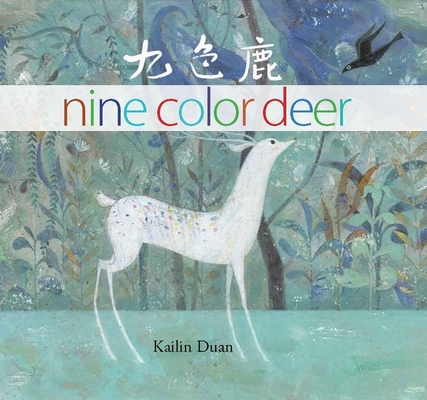 
On Our Shelves Now at:
Our Querido list is a wonder cabinet that we are filling with treasures from around the world. Here, from China, is a gorgeous story about generosity and gratitude, adapted from a traditional Buddhist tale by Kailin Duan. Her illustration style evokes artwork contemporary to the story's origins more than a thousand years ago, found in the famous Mogao caves, (located at a religious and cultural crossroads on the Silk Road, in Gansu province, China.)

The story begins deep in the Kunlun Hills with a legendary deer whose fur has nine colors. One day she hears a cry for help and rescues a drowning man. When the man asks how he could ever repay this kindness, the Nine Color Deer simply requests that the man never reveal her whereabouts.

But will this promise survive a bounty offered by a King and Queen who seek the magic of the deer for their kingdom?

Award-winning translator Jeremy Tiang offers readers his own gift in making Kailin Duan's interpretation sparkle in English, while Duan's illustrations speak beautifully for themselves.
Kailin Duan received her master's degree from the China Academy of Art in 2019, majoring in Illustration. NINE COLOR DEER was shortlisted for the Bologna Illustrators Exhibition 2021.

Jeremy Tiang is a novelist, playwright and translator from Chinese. He was longlisted for the 2021 PEN America Literary Awards for his rendering of Faraway by Lo Yi-Chin. His translations also include novels by Yeng Pway Ngon and Su Wei-Chen plays including Salesman, A Dream of Red Pavilions, and scripts by Chen Si'an and others. Originally from Singapore, he now lives in Flushing, Queens.
“The illustrations mimic the texture of cave paintings, bringing visual interest and reinforcing the connection to the source material. Artistic choices and an ethereal palette of tranquil greens and pale earth tones make this adaptation distinct and aesthetically pleasing. An elegant retelling of a timeless story of humility and conservation.”-Kirkus Reviews

“A beguiling and welcome new telling of a traditional tale.” - The Horn Book