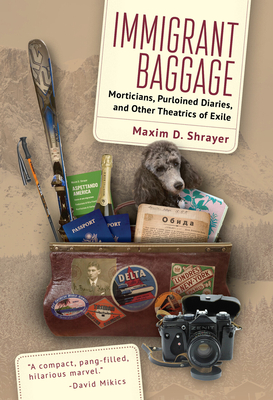 From a bilingual master of the literary memoir comes this moving and humorous story of losing immigrant baggage and trying to reclaim it for his American future.

Maxim D. Shrayer, bilingual author and scholar, was born in Moscow in 1967 to a Jewish-Russian family with Ukrainian and Lithuanian roots and spent over eight years as a refusenik. He and his parents, the writer David Shrayer-Petrov and the translator Emilia Shrayer, left the USSR and immigrated to the United States in 1987. Shrayer received a PhD from Yale University in 1995. He is Professor of Russian, English, and Jewish Studies at Boston College. Shrayer has authored and edited over twenty books of nonfiction, criticism, fiction, poetry, and translations. Among his books are the literary memoirs Waiting for America and Leaving Russia and the collection A Russian Immigrant: Three Novellas. He is the recipient of a number of awards and fellowships, including a 2007 National Jewish Book Award and a 2012 Guggenheim Fellowship. Shrayer's publications have been translated into ten languages. He lives in Massachusetts with his wife, Dr. Karen E. Lasser, a medical researcher and physician, and their daughters Mira and Tatiana.