A Pictorial History of Highway 99: The Scenic Route-Redding, California to Portland, Oregon (Paperback) 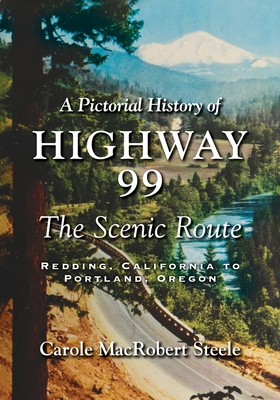 A Pictorial History of Highway 99: The Scenic Route-Redding, California to Portland, Oregon (Paperback)

Spanning from the early 1900s through the 1960's, this nostalgic ride through Northern California and Oregon is one of the most highly visual histories ever written on U. S. Highway 99.

Vintage postcard images depict how the crudely constructed Pacific Highway transitioned into the modern and paved U. S. Highway 99, only to be mostly abandoned when the new interstate opened.

Traversing a myriad of landscapes, Highway 99 meanders through quaint towns and big cities, past towering pines and snow-capped mountains as mighty rivers gush through steep rugged canyons toward the fertile valleys of Oregon.

Adding to the grandeur of this scenic route are iconic landmarks such as Mt. Shasta, Mt. McLoughlin, and Mt. Hood.

Learn how Interstate 5 evolved from a crude one-lane dirt road.

Learn how travelers transitioned from tent camping to cozy motels.

Learn the perils and predicaments of early highway travel.