Crossfire Hurricane: Inside Donald Trump's War on Justice and the FBI (Paperback) 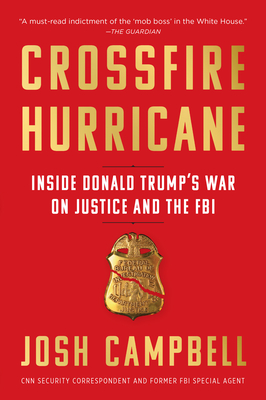 Crossfire Hurricane: Inside Donald Trump's War on Justice and the FBI (Paperback)


Special Order—Subject to Availability
CROSSFIRE HURRICANE DELIVERS THE DEFINITIVE HISTORY OF HOW WE GOT FROM 2016 TO TODAY, tracing the events that lead this country to a historic impeachment and beyond.

“A must-read indictment of the ‘mob boss’ in the White House.” —The Guardian

“An indispensable and riveting insider’s account of one of the most dramatic and controversial periods in the history of the FBI. Crossfire Hurricane is a must-read for all Americans.” —Daniel Silva, New York Times bestselling author

“Campbell speaks both from the heart and experience. A dynamite read.” —Dan Rather, former anchor of CBS Evening News and bestselling author of What Unites Us

It is January 6, 2017, two weeks before the inauguration. Only a handful of people know about the Steele dossier, and the nation is bitterly divided by the election results. As rumors begin to circulate that something might be brewing with the newly elected president and Russia, FBI special agent Josh Campbell joins the heads of the US intelligence community on a briefing visit to Trump Tower in New York City. He does not yet know that this meeting will eventually lead to the firing of his boss, James Comey, or that within weeks his former boss Robert Mueller will be appointed to investigate collusion and obstruction of justice at the highest level. He does not yet know that the FBI will come under years of sustained attacks from the commander in chief of the very nation its agents have sworn to protect. But, from his unique position within the FBI, he will watch it occur.

In this gripping fly-on-the-wall narrative, Campbell takes readers behind the scenes of the earliest days of the Russia investigation—codename: Crossfire Hurricane—up to the present. Using both firsthand experience and reporting, he reveals fresh details about this tumultuous period; explains how the FBI goes about its work and its historic independence from partisan forces; and describes the increasing dismay inside the bureau as the president and his allies escalate their attacks on the agency. Appalled by Trump’s assault on the bureau’s credibility, Campbell left the FBI in 2018 to sound the alarm about unfair political attacks on the institutions that keep America safe.

Smart, clear, passionate, Crossfire Hurricane will captivate readers struggling to make sense of a news cycle careening out of control.

Josh Campbell is a CNN law enforcement analyst. Prior to joining the network, Campbell was a supervisory special agent with the FBI and served as special assistant to FBI director James Comey. His career included conducting high-profile terrorism and kidnapping investigations, serving overseas in multiple diplomatic and operational assignments, and managing the bureau's interagency communication response strategy following crisis incidents. He received four FBI Combat Theater Awards for his work embedded with military special operations and CIA teams abroad. Campbell has an MA in communication from Johns Hopkins and a BA in government from the University of Texas at Austin. He is a term member with the Council on Foreign Relations and teaches national security at the University of Southern California.

“A newsworthy book in an electoral cycle that promises to see plenty of foreign interference—and little resistance from Republicans.”
—Kirkus Reviews

“Josh Campbell had the ultimate insider’s perch as President Trump initiated the greatest crisis in the modern history of the FBI. Crossfire Hurricane is his fascinating account of those tumultuous days and a vivid reminder of the importance of honor and candor in law enforcement and politics.”
—Jeffrey Toobin, CNN Chief Legal Analyst and author of American Heiress: The Kidnapping, Crimes and Trial of Patty Hearst

“With experience, humanity, and humor, Josh brings the reader deep inside the FBI during some of its most difficult days.”
—James Comey, former director of the FBI and bestselling author of A Higher Loyalty

“Crossfire Hurricane is likely to become one of the most important books of the year. Josh Campbell speaks both from the heart and experience. A dynamite read.”
—Dan Rather, former anchor of CBS Evening News and bestselling author of What Unites Us

“Josh Campbell spent more than a decade serving America as an FBI agent. He is serving America still by writing this book. He provides an invaluable, behind-the-scenes perch on James Comey's last days and Robert Mueller's subsequent special investigation. Anyone who reads his gripping account will know that the FBI is not a Deep State out to unseat the president. It is a superb and apolitical law enforcement organization that has been blindsided by all of the invective from political partisans. Read this book to find out what the FBI is really like.”
—Max Boot, Council on Foreign Relations senior fellow and author of The Corrosion of Conservatism: Why I Left the Right

“Crossfire Hurricane is a chilling and engaging contribution to our understanding of the FBI and the Russia investigation. Josh Campbell had a front seat to the decisions and dilemmas facing the FBI before and after 2016 and tells the story with honesty, compassion and even humor. He reminds us that it is too easy to judge by simply saying the FBI should 'follow the book.' When it comes to Russia, President Trump, and a campaign willing to play with a foreign enemy, there is no book. Until Josh Campbell wrote it.”
—Juliette Kayyem, former Assistant Secretary, Department of Homeland Security

“With no political agenda other than reverence for the FBI as an institution, Campbell offers a compelling and unvarnished portrait of men and women struggling to deliver impartial justice in the middle of a relentless wave of political firestorms.”
—Michael Isikoff, bestselling co-author of Russian Roulette and Yahoo! News chief investigative correspondent

“An indispensable and riveting insider’s account of one of the most dramatic and controversial periods in the history of the FBI. Crossfire Hurricane is a must-read for all Americans.”
—Daniel Silva, New York Times bestselling author

“I couldn't put down Crossfire Hurricane: Inside Donald Trump's War on the FBI. The book provides a compelling overview of events surrounding the FBI during the 2016 election and its aftermath. Even for those of us who are still living through this in real time, it's stunning to read a cohesive narrative of the events—often with shocking details from an FBI insider's perspective. Just as important, Josh uses anecdotes throughout the book that capture the essence of what it means to be an FBI agent in the field working every day to help keep this country safe—something that is all too often lost in the day-to-day headlines these days.”
—Mimi Rocah, NBC/MSNBC legal analyst and former federal prosecutor