The Republic of Violence: The Tormented Rise of Abolition in Andrew Jackson's America (Hardcover) 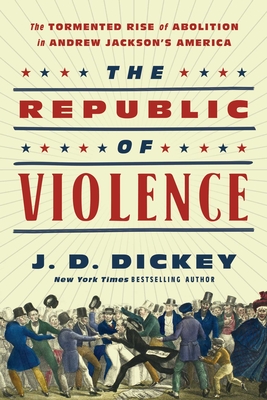 The Republic of Violence: The Tormented Rise of Abolition in Andrew Jackson's America (Hardcover)


In Stock—Click for Locations
A New York Times bestselling author reveals the story of a nearly forgotten moment in American history, when mass violence was not an aberration, but a regular activity—and nearly extinguished the Abolition movement.

The 1830s were the most violent time in American history outside of war. Men battled each other in the streets in ethnic and religious conflicts, gangs of party henchmen rioted at the ballot box, and assault and murder were common enough as to seem unremarkable. The president who presided over the era, Andrew Jackson, was himself a duelist and carried lead in his body from previous gunfights. It all made for such a volatile atmosphere that a young Abraham Lincoln said “outrages committed by mobs form the every-day news of the times.”

The principal targets of mob violence were abolitionists and black citizens, who had begun to question the foundation of the U.S. economy — chattel slavery — and demand an end to it. Led by figures like William Lloyd Garrison and James Forten, the anti-slavery movement grew from a small band of committed activists to a growing social force that attracted new followers in the hundreds, and enemies in the thousands. Even in the North, abolitionists faced almost unimaginable hatred, with newspaper publishers, businessmen with a stake in the slave trade, and politicians of all stripes demanding they be suppressed, silenced or even executed.

Carrying bricks and torches, guns and knives, mobs created pandemonium, and forced the abolition movement to answer key questions as it began to grow: Could nonviolence work in the face of arson and attempted murder? Could its leaders stick together long enough to build a movement with staying power, or would they turn on each other first? And could it survive to last through the decade, and inspire a new generation of activists to fight for the cause?

J.D. Dickey reveals the stories of these Black and white men and women persevered against such threats to demand that all citizens be given the chance for freedom and liberty embodied in the Declaration of Independence. Their sacrifices and strategies would set a precedent for the social movements to follow, and lead the nation toward war and emancipation, in the most turbulent era of our republic of violence.
J. D. Dickey is the New York Times bestselling author of Empire of Mud, a history of the troubled rise of Washington, D.C., in the nineteenth century, Rising in Flames: Sherman’s March and the Fight for a New Nation and American Demagogue, both published by Pegasus Books.
“A new history of the 1830s anti-slavery movement and the unprecedented violence with which it was met. Dickey focuses on several key abolitionist leaders, notably William Lloyd Garrison, easily the best-known figure of the movement’s early years. But as the author shows, Garrison was hardly alone. While he was a pioneering voice, he had a number of supporters and rivals for the leading role in the movement. A fascinating look at a slice of history that may be unfamiliar to many general readers.”
— Kirkus Reviews

“No one interested in Sherman’s triumphant march should be deprived of his lively narrative [of Rising in Flames]. Absolutely spellbinding… a testament to the author’s prodigious research.”
— Wall Street Journal

“Dickey deftly portrays the tumult. Black abolitionists — who, Dickey hints, were never allowed to radicalize to the same degree as whites — drive the narrative.  This reader is hoping a future volume will see Dickey bring his lively prose to the 1840s abolitionist movement. The Republic of Violence is not your typical chronicle of abolition, and readers are the better for it.”
— Washington Independent Review of Books