High Minds: The Victorians and the Birth of Modern Britain (Hardcover) 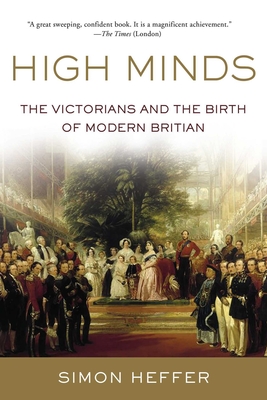 High Minds: The Victorians and the Birth of Modern Britain (Hardcover)


On Our Shelves Now at:
An ambitious exploration of the making of the Victorian Age—and the Victorian mind—by a master historian.

Britain in the 1840s was a country wracked by poverty, unrest, and uncertainty; there were attempts to assassinate the queen and her prime minister; and the ruling class lived in fear of riot and revolution. By the 1880s it was a confident nation of progress and prosperity, transformed not just by industrialization but by new attitudes to politics, education, women, and the working class. That it should have changed so radically was very largely the work of an astonishingly dynamic and high-minded group of people—politicians and philanthropists, writers and thinkers—who in a matter of decades fundamentally remade the country, its institutions and its mindset, and laid the foundations for modern society.

High Minds explores this process of transformation as it traces the evolution of British democracy and shows how early laissez-faire attitudes to the fate of the less fortunate turned into campaigns to improve their lives and prospects. The narrative analyzes the birth of new attitudes in education, religion, and science. And High Minds shows how even such aesthetic issues as taste in architecture collided with broader debates about the direction that the country should take.

In the process, Simon Heffer looks at the lives and deeds of major politicians; at the intellectual arguments that raged among writers and thinkers such as Matthew Arnold, Thomas Carlyle, and Samuel Butler; and at the "great projects” of the age, from the Great Exhibition to the Albert Memorial. Drawing heavily on previously unpublished documents, he offers a superbly nuanced portrait into life in an extraordinary era, populated by extraordinary people—and show how the Victorians’ pursuit of perfection gave birth to the modern Britain we know today.
Simon Heffer took a PhD in modern history at Cambridge. His previous books include: The Age of Decadence; Moral Desperado: A Life of Thomas Carlyle; Like the Roman: The Life of Enoch Powell; Power and Place: The Political Consequences of King Edward VII; and Nor Shall My Sword: The Reinvention of England. In a thirty-year career on Fleet Street, he has held senior editorial positions on The Daily Telegraph and The Spectator and is now a columnist for The Sunday Telegraph. He lives in London.
Praise for High Minds

"The contrast between the 'gentleness' that characterized contemporary English civilization and the 'brutality' that had distinguished English life a hundred years earlier...forms the focal point of this astute political and intellectual history of England from the 1830s to 1870."
— Benjamin Schwarz

Praise for The Age of Decadence:

"There are many pleasures to be had in this fine book, not the least of which is the vivacity of Heffer’s prose. He writes elegantly but punchily, combining seriousness with welcome flashes of waspishness that stop things from getting stuffy. The Age of Decadenceis a masterpiece of pacing. By the final pages, Heffer has skillfully conjured a country in chaos and heading over the edge."
— The New York Times Book Review

"What Heffer recounts is fascinating in itself, but also eerily familiar, almost contemporary. History, after all, provides perspective on the present. Heffer's book offers glorious abundance.”
— Michael Dirda, The Washington Post

“Simon Heffer writes with admirable sensitivity about both music and literature. He does a brilliant job of exposing the rot beneath the glittering surface of late Victorian and Edwardian Britain. He writes with such exuberance—indeed with such Edwardian swagger—that he leaves the reader looking forward to his next volume.”
— The Economist

“The years between Queen Victoria’s Diamond Jubilee and the start of WWI found Britain swaggering with both empire and wealth, but undergoing vast political, economic, social, and technological change.  Nothing escapes Heffer’s notice. Amid this, tensions are growing in Edwardian society that culminate in the sweeping away of many of Britain’s imperial pretension in the ghastly trenches of France.  Heffer’s history is broad and deep and casts a brilliant light on this remarkable era.”
— Booklist

“A riveting account of the pre-First World War years . A gloriously rich history. Balanced and judicious. The Age of Decadence is an enormously impressive and enjoyable read.”
— The Sunday Times (London)

“The Age of Decadence is an impressively well-constructed book. Heffer weaves his wonderfully diverse strands of inquiry into a devastating critique of prewar Britain. His criticism of unbridled traditionalism is devastating and convincing. It’s also disturbingly relevant to the world in which we live.”
— The Times (London)